FBI Directors Are Appointed for 10-Year Terms. Here's Why

When President Donald Trump fired FBI director James Comey on Tuesday, Comey was only a bit more than a third of the way into his 10-year term. When the President appoints Comey’s successor, whoever is confirmed for the job will also be looking at a 10-year term.

But, though Comey’s time in the director’s position was notably cut short, that term length was selected because of an FBI director who was in the job for a notably lengthy time. When J. Edgar Hoover died on May 2, 1972, he had served for a whopping 48 years.

Hoover’s place at the FBI was at first hailed by many. “We were in the Cold War, there were penetrations of the government by Soviet spies and communists, and Hoover personified the anti-communist effort,” says Ronald Kessler, former Washington Post investigative reporter and author of The Secrets of the FBI. “He wrapped himself in the flag and was this great patriot, and nobody could question him, so in that sense, he was a product of the times.”

But over the course his term, the power he held began to seem a little too extreme. During those years, Hoover had already become infamous for keeping blackmail files on members of Congress, even Presidents, and for wire-tapping dissidents (which, in his view, even included Martin Luther King Jr.). Even so, he kept his job. Richard Hack, author of Puppet Master: The Secret Life of J. Edgar Hoover, told NBC’s Dateline that President John F. Kennedy was “scared to death” of Hoover because he didn’t know the full extent of the dirt that Hoover may have had on him. As President Lyndon B. Johnson once explained why he couldn’t fire Hoover: “I’d rather have him inside the tent pissing out than outside pissing in.”

After Hoover died, his legacy was one of the many elements of pre-Watergate government that was put under the microscope. The Church Committee was also established to investigate the practices of the intelligence community.

“A very liberal congress was elected in ’74 in the spirit of reforming the U.S. government,” says Tim Weiner, a Pulitzer Prize-winner and author of Enemies: A History of the FBI. “Hoover was perceived as someone who ruled by fear, who was sometimes more powerful than presidents.”

One of the solutions arrived at holds to this day: a 10-year term limit.

The idea behind that precise length was that it would be short enough to avoid another Hoover situation but long enough that the director “would transcend electoral politics,” as Weiner puts it, and ensure that “a president wouldn’t come in and fire the director of the FBI because he was a Republican or Democrat.”

In the years since the term limit was established, however, exceptions have been made. In 2011, President Obama signed an extension to Robert Mueller’s term in the job, in light of national-security concerns. And that wasn’t the only distinction held by the duration of Mueller’s term: though the FBI Director job is supposed to last 10 years, Mueller — who served for 12 — is the only one since the limit was set to have actually reached the decade mark. Most of the men who have held the job have resigned before their terms ended.

Comey, only the second FBI Director ever to be fired, served the shortest term for any full-fledged, non-acting FBI Director since the term limit was set. 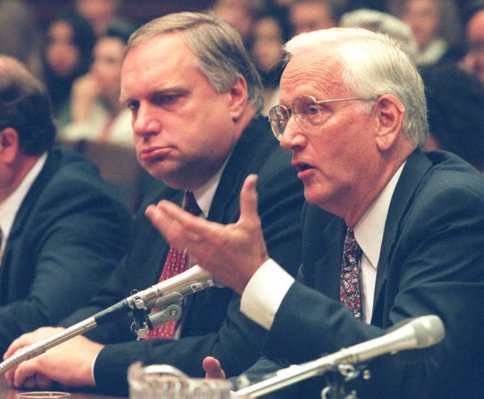 James Comey Is the Second FBI Director to Be Fired. Here's What Happened the Other Time
Next Up: Editor's Pick