Oscar-winning Big Little Lies actor Nicole Kidman doesn’t have much tolerance for the stress of cooking. And she certainly doesn’t have time for the dirty jokes and evidently unsatisfactory pizza-like concoction of Food Network star Giada De Laurentiis. The two women joined host Ellen DeGeneres on her show for a cooking lesson — although Kidman had a less-than-savory critique of De Laurentiis’s special spring flatbread.

“It’s a little tough,” she told the food celebrity after trying — and struggling — to take a bite of the clementine-and-fennel-topped focaccia, which DeGeneres also had a hard time chewing. “I know you’re not meant to criticize, but it’s a little tough,” Kidman added. (In her defense, De Laurentiis pointed out that the pre-baked flatbread they were chowing down on had been sitting out for hours in preparation for filming.)

Earlier in the lesson, De Laurentiis tried to get DeGeneres and Kidman to mold arancini, the fried balls of risotto.

“Nicole, have you made meatballs or anything?” De Laurentiis joked about Kidman’s unknown level of culinary expertise. Kidman’s response: some Oscar-worthy side-eye.

“This is a family-friendly show,” Kidman said. Later, she noted that she didn’t find cooking to be a particularly enjoyable pastime. “Isn’t it meant to be relaxing, sort of? That’s what my problem is when I cook. I get anxious and anxiety.”

Watch the trio attempt to became masters of the kitchen despite it all, above. 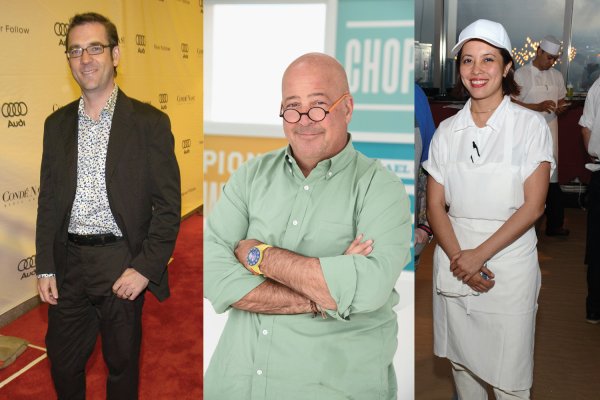 3 Food Celebrities on the Foods You Should Never Eat
Next Up: Editor's Pick