Fans of the Jon Stewart-era Daily Show got quite a treat on Tuesday night’s Late Show with Stephen Colbert.

Colbert wrangled guest appearances from none other than Jon Stewart himself, plus former star Daily Show correspondents Samantha Bee, John Oliver, Ed Helms, and Rob Corddry for a big helping of nostalgia. Quite the squad reunion. (All four of the alums, it’s worth noting, have moved on to make big career moves of their own away from the show: Bee and Oliver host their own news-comedy specials, “Full Frontal” and “Last Week Tonight,” while Helms and Corddry have picked up a number of acting gigs in shows and movies, including Helms’ turn in “The Office” and The Hangover, and Corddry’s partnership with The Rock on HBO’s “Ballers.”)

During his 16-year run as host, Stewart’s show aired just before Colbert’s on Comedy Central. Stewart made a ritual of handing off the end of his slot to Colbert with some inter-show banter, tying the two evening news parodies together. So even though Colbert has since made the jump to CBS, the two clearly remained close enough to pull off this news-junkie reunion of sharp-tongued comedians. Calling themselves “fake news heroes,” the quintet of Daily Show alumni showed up to give late-night TV an extra-acerbic boost. 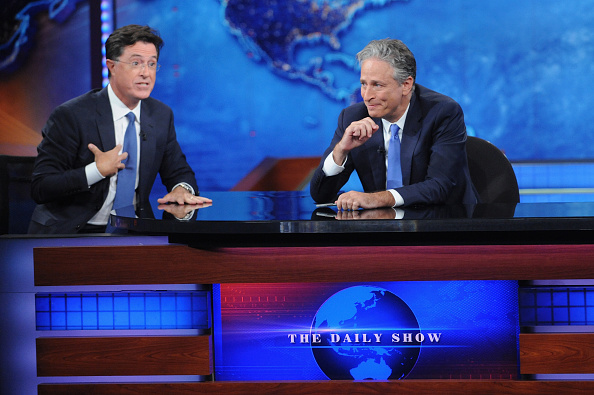 The Complete History of Stephen Colbert and Jon Stewart's Legendary Friendship
Next Up: Editor's Pick