In her first year at the Securities and Exchange Commission, Chair Mary Jo White has toughened enforcement, broken a partisan stalemate over post-crash regulation and launched studies of high frequency trading and market fragmentation. In a profile in this week’s magazine, available to subscribers here, TIME reports on how she has turned the agency around and where she is taking it.

Last month she sat down for an interview with TIME in her office overlooking the U.S. Capitol Building. An edited version follows.

One of the first things you did on arriving at the SEC was to change its settlement policy to require admissions of guilt in certain cases. How did you come to that position?

When I was U.S. Attorney I actually did the first deferred prosecution agreement and in that case I decided admissions really added to the accountability of the purported potential defendant.

The money market fund rule proposed last June broke a rule-making stalemate at the SEC but it was a compromise. Why should everyday Americans have faith that a rule produced by a political compromise will be effective?

Our proposal was based on a very important analysis and study by our economists, and that made a tremendous impact not only on me, but on the other commissioners [by showing that the 2010 reforms] didn’t completely address the phenomenon that we’d seen, the structural vulnerability that we’d seen,during the financial crisis. Second, this is an independent agency, we are deciding this on the merits.

Sen. Sherrod Brown [Democrat of Ohio] said he voted against you in committee in part because he thought you were too close to Wall Street. What do you say to those who say as a white collar defense lawyer you’re predisposed to Wall Street’s view more than the individual investor you’re charged with protecting?

My job here, my duty here, is to serve the American public, obviously, including investors in our markets, and that’s what I do. I started my career in the private sector and then became U.S. attorney. I think I was a stronger U.S. attorney, and I frankly think I am a stronger Chair of the SEC, because of that experience.

You said the policy of requiring admissions of guilt would evolve. What do you mean by that?

I would expect it to expand. There are lots of things you could put into the bucket of “particularly egregious conduct,” which is one of things we consider when seeking admissions. So far we’ve proceeded primarily with admissions against institutions, which I think is appropriate. But one must also think about appropriate cases for individuals too when the conduct was particularly egregious.

I think what she was saying was, are they too big to try in court? The answer is they’re not too big to try. If you get everything you ask for in a settlement that the law allows you to have and they agree to it, there’s not going to be a trial. There is a premium that companies of all kinds place on putting the matter behind them. So that’s going to translate into not very many trials because they’re going to give us as the government all the relief we are seeking in a settlement.

Why have you proposed a review of company’s public disclosure procedures? The left is angry.

And they shouldn’t be. All you have to do is read the disclosures that are out there now and be struck by the fact that we can do this better and in a more meaningful way. The idea isn’t less disclosure, the idea is more meaningful disclosure for investors.

The left in general is unhappy. They see you as being overly solicitous to concerns of commissioners on the right and staffers here whom they perceive to be institutionally aligned with prior administrations.

One of the things that’s interesting about this job is that it’s unlike being U.S. Attorney, where 90% of what you do, everybody loves. You’re going after bad guys. Here everything you do somebody’s going to dislike. That just kind of goes with the territory I think, and my job is to do what I think is the right thing. Carry out the mission the best way I can.

Is there anything about the market structure that worries you, that keeps you up at night? That makes you feel like there’s an imminent danger to the economy or the markets?

My usual answer to what keeps me up is I don’t sleep. Which is actually true.

How many hours of sleep do you get a night?

About four. That’s always been true. It serves me very well now.

But in terms of the market structure issues, each issue can undermine the confidence in our markets. The fragmentation of markets, dark pools and high frequency traders—it’s important to say that those phenomena are pretty well known.

The impacts, however, are not as well known and the theories about them are all over the lot. And so one of my primary focuses, really since before I walked in the door, was to make sure that we were doing everything we could to fully understand those issues. We do have a lot of safeguards. It’s just a matter of what else do we need to do, to make it even better, more resilient.

Even your friends say that while you’re an expert on enforcement, you’re a novice on market structure and rules.

Every chair and every commissioner has different expertise. The staff, however, has the full range of expertise. So you pick your staff well. You listen to them. You learn. I think I’m a quick study. I also, in my prior life, sat on the NASDAQ board for four years and was exposed to a number of these issues then, including many of the market structure issues. I made a decision about whether, given my particular background, I thought I could do a very strong job here and I certainly made the decision that I could. And I guess time will tell.

What’s your vision for the commission and what you can achieve while you’re here?

Overall vision is that it remains the very strong independent agency that it is, that oversees the fairness and safety of the markets on behalf of companies and investors and that’s really the heart of it. I’d like to see significant progress made on market structure issues. Being perceived as a strong cop on the beat I think is very important on the enforcement side, in terms of the confidence in the safety of our markets and the credibility not just of law enforcement but of government itself.

Did a good job and was a strong leader of a strong agency.

Have you had any conversations with the White House or anybody else about being Attorney General if that job opened up?

I’m not going to talk about specific conversations.I’m here to do this job. 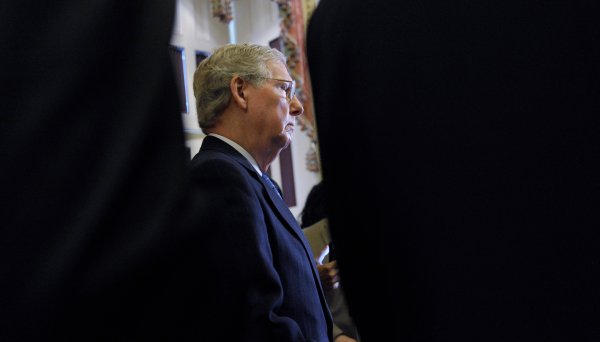 Exclusive: McConnell Would Govern Like This Democrat
Next Up: Editor's Pick