The exchange occurred during Yates’s testimony before a Senate Judiciary subcommittee on Russian interference in the 2016 U.S. presidential election.

The fiery back-and-forth began when Cruz turned the conversation from Russian interference to Trump’s travel ban, which Yates refused to defend and was then fired by the Trump Administration in February. Cruz asked Yates if an attorney general has the authority to defy a “policy decision that is lawful” from the president.

“I don’t know whether the attorney general has the authority to do that or not, but I don’t think that would be a good idea. And that’s not what I did in this case,” Yates responded.

Cruz then cited a statute that allows the president to suspend entry from foreign visitors to the U.S. Yates said she agreed with the statute, but then responded by quoting the Immigration and Nationality Act, which says, “no person shall receive any preference or priority or be discriminated against in the issuance of an immigrant visa because of the person’s race, sex, nationality, place of birth, or place of residence.”

Yates said she was not concerned with whether Trump’s order fell under the act, but was more interested in whether or not it was constitutional. She also cited a directive from the Department of Justice’s Office of Legal Counsel, saying she “was not convinced” the executive order was “lawful.”

Cruz ended the conversation by asking if Yates had ever heard of an instance of an attorney general directing the Department of Justice of not following a policy after the department approved its legality.

“I’m not,” Yates responded. “But I’m also not aware of a situation where the Office of Legal Counsel was advised not to tell the attorney general about it until after it was over.”

Watch the exchange in the video above. 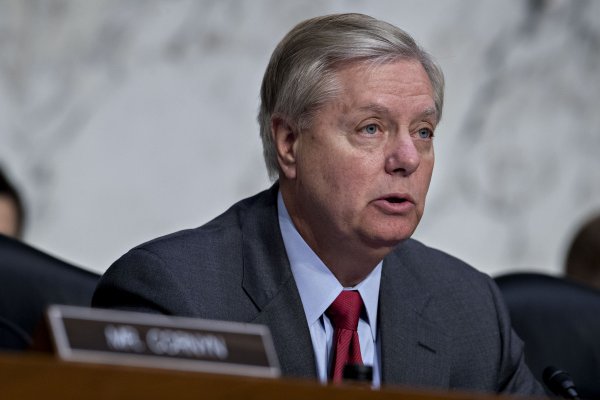 Sen. Lindsey Graham: It Was Russia, 'Not Some 400-Pound Guy' That Hacked the 2016 Election
Next Up: Editor's Pick