By Charlie Campbell / Beijing and Seoul

South Korea has chosen its new President. Center-left candidate Moon Jae-in was elected by a landslide on Tuesday to replace ousted President Park Geun-hye, who was impeached in December on charges of bribery and abuse of power.

According to official results, Moon, candidate for the liberal Democratic Party, lead with 41.1% of the vote. Hong Jun-pyo, of Park’s conservative Saenuri Party, was behind with 24%, leaving centralist People’s Party candidate Ahn Cheol-soo in third place on 21.4%. Turnout was high in the nation of 50 million despite persistent drizzle.

“I will make a just, united country,” Moon told a crowd of supporters just before midnight after his opponents conceded defeat. “I will be a president who also serves all the people who did not support me.”

The son of refugees from North Korea, Moon grew to prominence as a student activist, and was twice jailed for organizing pro-democracy demonstrations against South Korean dictator Park Chung-hee, the impeached Park’s father. Moon later became a human-rights lawyer and then chief-of-staff to former President Roh Moo-hyun, whose policy of engagement with North Korea he has vowed to rekindle.

Moon, 64, harnessed public outrage against the Park corruption scandal, frequently addressing the crowds of hundreds of thousands who took to the streets to demand her ouster. Prosecutors accuse Choi Soon-sil, a family friend of Park, of taking millions of dollars from South Korea’s chaebol — large conglomerates like Samsung, Hyundai and LG — in exchange for favorable policies. Both Choi and Park remain in detention pending trial.

Moon ran on reforming the chaebol, which contribute 55% of national GDP but only 5% of jobs and hold inordinate sway over domestic politics. He also pledged to create 810,000 government jobs and provide incentives for private employers to hire. Speaking to TIME in Seoul last month, Moon said he was ready to “overcome the current crisis of security, diplomacy and the economy and rebuild our nation.”

Security concerns overshadowed the presidential campaign, owing to deteriorating relations between the U.S. and North Korea following President Donald Trump’s threats of military strikes in response to Kim Jong Un’s escalating nuclear and missile tests. The regime has tested five nuclear bombs to date, as well as missiles it claims will one day be able to carry warheads as far as the U.S. mainland.

On April 8, Trump ordered a U.S. navy strike group — an “armada,” as he put it — to the Korean peninsula. On April 16, North Korea attempted another missile test just hours before U.S. Vice-President Mike Pence arrived in Seoul for an official visit. Pence responded by saying that military options remained “on the table.” In turn, a Pyongyang spokesperson threatened “a preemptive nuclear attack … if the U.S. shows even the slightest sign of a preemptive attack on [North Korea].”

The political vacuum created by Park’s impeachment has seen South Korea largely sidelined in the escalating rhetoric. That’s despite the fact that its 50 million citizens — half of whom live in the greater Seoul area, within 35 miles of the DMZ — are on the front line of any North Korean retaliation. “Any decision by the U.S. should be made in close consultation with South Korea, its close ally,” Moon told TIME.

Moon has vowed to repair inter-Korean relations, advocating measured engagement with the Kim regime. He has also suggested that the U.S. Terminal High Altitude Area Defense (THAAD) missile defense system in South Korea should be put under review. Washington says THAAD has been deployed specifically to counter the threat of North Korean missiles, but Beijing is highly threatened by the surveillance capabilities of THAAD’s powerful radar, and a tourism and retail boycott of South Korea has been launched in response.

At the same time, the presidential campaign was largely fought on domestic matters. South Korea’s suffers from severe income inequality, rising youth unemployment and torpid growth. Moon’s chief rival, People’s Party candidate Ahn Cheol-soo, 55, a medical doctor who became a multi-millionaire by developing the antivirus software AhnLab, focused on jobs creation. In the end, though, the opposition to Moon was split between Ahn and a third candidate, Hong Jun-pyo, who became know as “Hong Trump” due to his abrasive remarks.

“For Moon to lose, it had to be either Ahn or Hong, one or the other,” says John Delury, an East Asia expert at Seoul’s Yonsei Univeristy. “But they just split too many votes.”

For many voters, the official response to the Sewol Ferry tragedy of April 16, 2014 crystalized dissatisfaction with Park’s conservative administration. A total of 304 people — mostly high school students on a sightseeing trip — perished in Korea’s freezing southeastern waters due to the vessel’s severe overloading. Park went missing for several hours while the tragedy unfolded.

Relatives say those trapped inside the vessel, which listed for two and a half hours before sinking, could have been saved with clear, strong leadership. They also question why more than half of the 172 survivors were rescued by fishing boats and other commercial vessels, despite their arriving some 40 minutes after the coastguard. The boat then took three years to be brought to the surface, prompting accusations of an official coverup — an allegation the Park administration denied.

At a ceremony to mark the third anniversary of the disaster, which fell during the presidential campaign, four of the leading candidates laid flowers before photos of the victims. Before a gathering of bereaved relatives, a choir sung the words, “Murderers, murderers, we must build a knife to get to the truth.”

“Young people now don’t believe the government, and they don’t have any interest in politics,” says Kim Woo Rin, 21, a sociology student at Sogang University, who stopped to pay respect at a Sewol shrine in central Seoul on the third anniversary of the tragedy. While Park’s impeachment was ostensibly about corruption and collusion, says Delury, “I don’t think people outside of Korea understand how central the Sewol sinking was.”

Aides close to Moon say he feels that the Sewol tragedy would have been avoided if he hadn’t narrowly lost the 2012 presidential election to Park. He also says he never harbored political ambitions until former President Roh Moo-hyun asked him to join his administration. Roh committed suicide in 2009, a year after leaving office, following a corruption investigation that snared several aides and family members and crept ever nearer. Moon says Roh’s death shocked him into seeking election himself to continue his mentor’s legacy.

He now has that chance. Moon’s election also marks a swing away from a decade of conservative government to one favored by Korea’s younger liberals.

“The reason why [younger people] favor me as presidential candidate is because they share my future-oriented values and policy visions,” Moon told TIME. “And I share their suffering and challenges they face. And I have effective plans to solve the problems they have.” 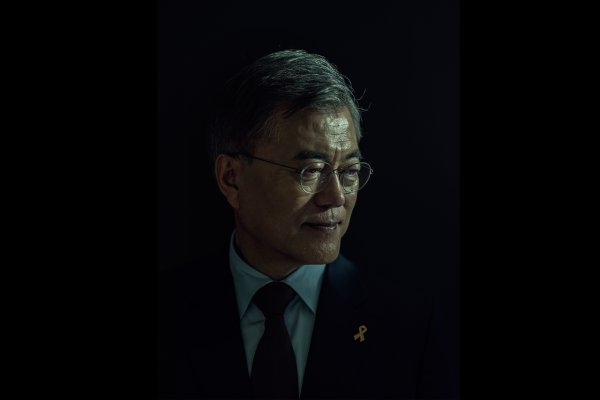 Meet Moon Jae-in: The Man Who Wants To Reason With North Korea
Next Up: Editor's Pick