The outgoing Christian governor of the Indonesian capital Jakarta, Basuki Tjahaja Purnama, popularly known as Ahok, was found guilty of blasphemy by a court in the Indonesian capital on Tuesday and sentenced to two years’ imprisonment. It was a stunning blow to a politician who has won praise for his clean and competent governance.

The sentence was heavier than that demanded by the prosecutors, who only recommended a year in jail with two years’ probation, and comes after Ahok’s defeat in a highly charged election that was seen as a victory for hard-line political Islam, and a defeat for plurality and secularism, in the world’s most populous Muslim nation.

He was taken to Cipinang detention center in Jakarta immediately after sentencing.

“It is unfair,” Rian Ernest, one of his lawyers, tells TIME.

Referring to mass rallies that have taken place in the Jakarta since last October — at which tens of thousands of conservative Muslims called for Ahok’s incarceration — Rian says: “The use of mass mobilization to criminalize someone could become a precedent. Next time, who knows which official might be criminalized that way?”

The blasphemy case against Ahok, who being of Chinese descent is a double minority in Indonesia, stemmed from a campaign speech in which he invoked a Quranic verse to hit back at Islamists who said Muslims shouldn’t elect a non-Muslim leader.

The growth of political Islam in Indonesia’s traditionally secular political arena of Indonesia has been viewed with concern by the authorities.

On Monday, the government announced its plan to ban HTI, which advocates an Indonesian caliphate. “The government needs to take legal steps to disband Hizbut Tahrir Indonesia in [the country],” said Chief Security Minister Wiranto on Monday, saying that the group threatened national unity

If the the government gets the legal green light then, HTI — which has been around for nearly two decades and could have as many as 3.5 million members — would be the first hard-line Islamist group to be banned since the fall of authoritarian President Suharto in 1998.

Meanwhile, the harsh sentence meted out to Ahok will only exacerbate tensions between Indonesia’s secular political establishment and increasingly vocal grassroots Islamists.

“The verdict will broaden the implementation of al-Maidah principle — which forbids Muslims from having non-Muslim leaders, according the Islamist interpretation,” Andreas Harsono, the Indonesia researcher of Human Rights Watch, tells TIME. “It will not only be applied toward elected officials but also to public servants and the executives of state-owned companies. The Islamists will obviously also reject Muslim leaders who do not cater their political interests.” 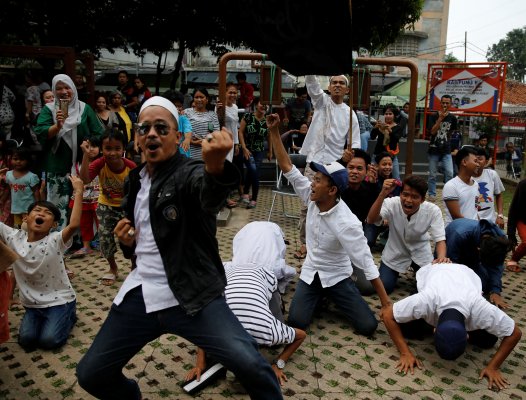 Hard-Line Islam Makes Its Mark in Indonesia
Next Up: Editor's Pick