Sen. John McCain Warns Rex Tillerson: 'We Are a Country With a Conscience'

The Republican senator penned an op-ed in the New York Times, writing that “”conditioning our foreign policy too heavily on values creates obstacles to advance our national interests” following recent remarks Tillerson made about the Trump administration’s “America First” policies.

“With those words, Secretary Tillerson sent a message to oppressed people everywhere: Don’t look to the United States for hope,” McCain wrote. “Our values make us sympathetic to your plight, and, when it’s convenient, we might officially express that sympathy. But we make policy to serve our interests, which are not related to our values.”

McCain argued that while some will champion Tillerson’s foreign policy agenda, the Arizona Republican said that would be wrong. “I consider myself a realist. I have certainly seen my share of the world as it really is and not how I wish it would be,” he wrote. “What I’ve learned is that it is foolish to view realism and idealism as incompatible or to consider our power and wealth as encumbered by the demands of justice, morality and conscience.”

In his own experience as a prisoner of war during the Vietnam War, McCain said he and his fellow prisoners were able to resist their captors efforts to break them by holding on to their faith that the American government and people had not forgotten about them. He recalled a story told by human rights activist Natan Sharansky, who expressed similar courage thanks to statements made by President Ronald Reagan.

“We are a country with a conscience. We have long believed moral concerns must be an essential part of our foreign policy, not a departure from it,” McCain wrote. “To view foreign policy as simply transactional is more dangerous than its proponents realize. Depriving the oppressed of a beacon of hope could lose us the world we have built and thrived in.” 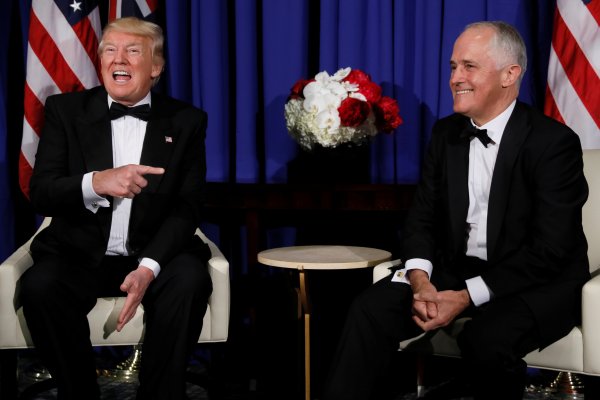 Trump and Australia's Turnbull All Smiles in New York
Next Up: Editor's Pick