Recent spiraling tensions between the U.S. and North Korea are rooted in Supreme Leader Kim Jong Un’s relentless pursuit of a nuclear deterrent, with hopes of a resolution undermined by the superpower rivalry between Washington and Pyongyang’s sponsors in Beijing. But far from the grand geopolitical strategizing, individuals can sometimes get caught up in the rancor.

As happened again on Saturday, when a fourth U.S. citizen was detained in North Korea on suspicion of “hostile acts,” raising fears that the regime might be gathering political prisoners at a time when Washington is ramping up pressure, following the North’s accelerating nuclear and missile tests.

Kim Hak-song, a teacher at Pyongyang University of Science and Technology (PUST), was arrested on May 6, according to North Korea’s state news agency KCNA. Last month, fellow U.S. citizen Kim Sang-duk (no relation) who had also taught at the school, was detained at Pyongyang Airport while trying to leave the country.

No specifics about their respective alleged crimes have been released.

The arrests come as U.S. President Donald Trump has turned up the heat on Kim Jong Un, dispatching the USS Carl Vinson naval strike group to the Korean peninsula, and warning of a “major, major conflict” unless the regime stops developing nuclear weapons. In response, North Korean state media warned the region was “being driven to a point close to nuclear war.”

Stephan Haggard, professor of Korea studies at the University of California San Diego, says the close timing of the two arrests “really suggests there may be a hostage-taking motive here.”

“It’s classic asymmetric warfare,” he adds, “You’re putting pressure on us, moving the Carl Vinson around, so we’re nabbing your citizens.”

There maybe domestic security pressures also. On Friday, North Korean state media published details of a supposed elaborate assassination plot against Kim Jong Un, allegedly sprung by the CIA and South Korea’s equivalent intelligence agency, the National Intelligence Service. The plot centered around a North Korean who was approached while working in Russia and persuaded to return home and poison Kim Jong Un using a biochemical agent. “Only the CIA can produce such substance,” the report said. The alleged conspirator was only identified as “Kim.”

The arrests of the two teachers “could reflect a panic on the part of the regime,” says Haggard, “that they’re under pressure and scrambling.”

According to John Delury, an East Asia expert at Yonsei University in Seoul, “My hunch is that there could be some connection. Two people from PUST suggests that there’s something up with this university.”

The PUST operates in a strange space in North Korea. It was founded by and is chiefly funded by evangelical Christians, despite North Korea being a strictly atheist communist regime where proselytization is illegal. Nevertheless, the university teaches the progeny of the North Korean elite. According to Haggard, who had one student who taught at PUST and has met with several school officials, great efforts were made to ensure religion has no part in the curriculum.

“They believe in engagement and teaching facts: science and agriculture and things that would be useful for the country,” says Haggard. “The agenda wasn’t to secretly to convert people [to Christianity.]”

Still, the school’s overtly Christian roots made it “a somewhat strange arrangement,” says Daniel Pinkston, an East Asia expert at South Korea’s Troy University. “There is a desire on the part of many Christians to proselytize. I’m not accusing these guys of anything, but I just see possibilities where you could get tripped up or even entrapped.”

The school has had previous brushes with the authorities. South Korean-born U.S. citizen Kim Chin Kyung, who founded the school in 2001 (it opened in 2010), was held as a political prisoner of Kim Jong Un’s father Kim Jong Il in 1998. In 2014, a former PUST staff member, Suki Kim, published an illicit memoir of her time teaching there three years earlier, titled Without You, There Is No Us.

The detained teachers join two other Americans currently in detention: Otto Wambier, a 22-year-old University of Virginia student arrested last year for allegedly destroying a propaganda poster; and Korean-American businessman Kim Dong-chul, 62, who is being held on espionage charges.

In the past, the regime has released U.S. prisoners to high profile envoys offering various concessions. Former U.S. Presidents Bill Clinton and Jimmy Carter have both performed this role in recent years, though the U.K. Financial Times reports that the Trump administration as specifically requested Carter not to intervene at the present time to keep up the pressure on Pyongyang.

That said, there are signs that Washington’s position maybe shifting. Last month, U.S. Secretary of State Rex Tillerson told “This Week” program that his administration has “no objective to change the regime in North Korea,” but simply wanted it to denuclearize. Then Trump told Bloomberg last week that he would be “honored” to meet with Kim Jong Un.

Were talks to take place, the return of detained U.S. citizens could form an appropriate olive branch, a senior U.S. diplomat told TIME in Seoul last month. The U.S. does not have diplomatic relations with North Korea and the Swedish Embassy in Pyongyang helps U.S. citizens who encounter problems in North Korea. However, to secure their release, the regime would require something in return.

“For any release it takes on the characteristic of a hostage situation — for some quid pro quo or a bargaining chip,” says Pinkston. “North Korea is not going to do it out of altruism.” 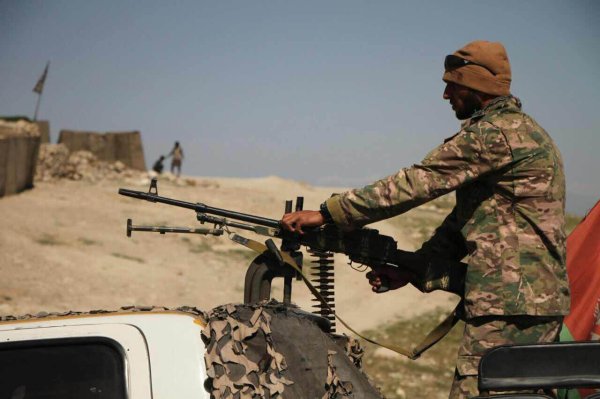 Leader of ISIS in Afghanistan Killed in Special Forces Raid
Next Up: Editor's Pick