Emma Watson accepts the award for Best Actor in a Movie during the 2017 MTV Movie And TV Awards on May 7, 2017 in Los Angeles, California.
Jeff Kravitz—FilmMagic/Getty Images
By Julia Emmanuele / AP

While accepting the award for best actor in a movie, Emma Watson dedicated her speech to celebrating the MTV Movie & TV Awards’ genderless acting categories.

“Firstly, I feel like I have to say something about the award itself,” the He For She founder began, while accepting the golden popcorn for her role as Belle in Beauty and the Beast.

“The first acting award in history that doesn’t separate nominees by their sex says something about the way we perceive the human experience. MTV’s move to create a genderless award for acting will mean something different to everyone, but for me, it indicates that acting is about the ability to put yourself into someone else’s shoes. And that doesn’t need to be separated into two categories.”

Watson, who beat out Taraji P. Henson, Daniel Kaluuya, Hugh Jackman and Hailee Steinfeld for the award, also thanked Billions actress Asia Kate Dillon, the first non-binary actor to play a non-binary character on TV, who presented her with the trophy.

“This is very meaningful to me, both to be winning this award and to be given it to me by you, Asia. Thank you for educating in me in such a patient, inclusive way.”

The Harry Potter alum further praised MTV for its decision to combine categories, saying, “Empathy and the ability to use your imagination should have
no limits,” before thanking fans for celebrating Belle for being such a strong character, and stating that she was proud that the film celebrates “diversity and literacy.” 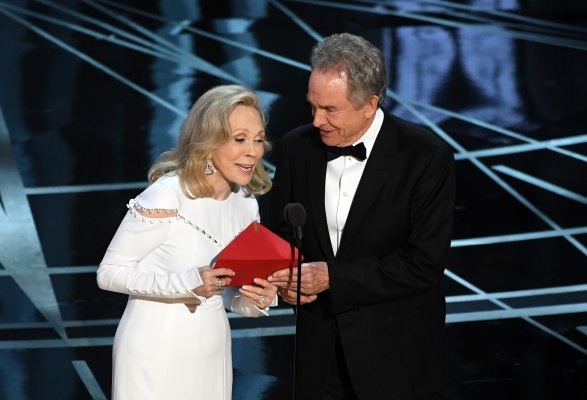 Faye Dunaway on Oscars Best Picture Flub: ‘I Was Very Guilty’
Next Up: Editor's Pick