Scarborough and Brzezinski, played by Alex Moffat and Kate McKinnon, respectively, hosted their regular morning show as usual — but played up the tension between the newly public couple during the show’s cold open.

As usual, the co-hosts discussed politics, this time focusing on the House Republican’s vote to repeal Obamacare.

“It’s crazy. I’m up it, I’m over it, I’m passed it,” McKinnon said as Brzezinski. “I’m in the driveway. The car is running. This party, your party, the Republican Party is completely morally bankrupt.”

“Oh, Mika, that’s enough,” Moffat as Scarborough replies. “You’re being sickening because you know it pushes my buttons.”

The co-hosts then exchange looks and lean in closer to each other.

The segment also features a call from John Miller, a fictitious spokesman for President Donald Trump. Miller, who is played by Alec Baldwin as Trump, is a reference to Trump’s apparent use of the pseudonym he used to speak to the press several decades ago.

Baldwin as Miller touts the success of the Republicans’ health care bill.

“After Congress voted we had a party. There was beer. The disaster that is Obamacare has finally been repealed,” he said.

Moffat’s Scarborough jumps in: “Hold on, sir. It’s not repealed yet. The bill still has to pass the Senate.”

“But there was beer,” Baldwin, playing Trump as Miller, responds.

Watch the full sketch in the video above. 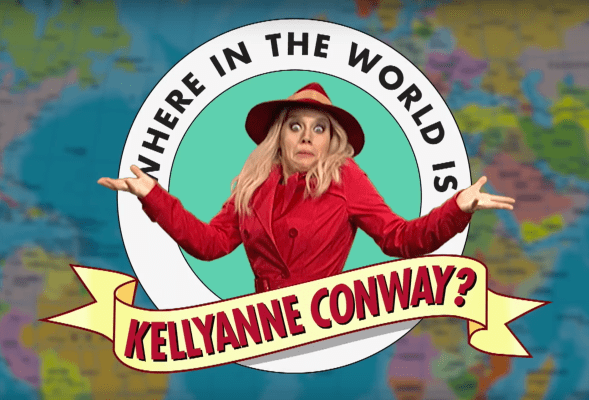 Saturday Night Live Wants to Know 'Where in the World Is Kellyanne Conway?'
Next Up: Editor's Pick