Zoe Saldana didn’t mince words when talking about Donald Trump’s election in a recent interview, saying that it was a reminder of the strong role race and sex still play in America.

“There was a realization that I just had in this last election is that, that America is racist,” she told Sway Calloway on SiriusXM’s Sway in the Morning.

“Of course, there’s racism everywhere,” she continued. “I’m not saying that there isn’t. But I think that sexism is much stronger and it’s much more aggressive. And turn on the TV, just read the newspaper.”

Noting that “CEOs are primarily males,” and that in the art world, “male painters are the ones that are more successful, primarily,” Saldana argued that while women do get involved, their numbers are disproportionally scarce.

“[This] lets you know logically that there is an imbalance,” she explained.

The Guardians of the Galaxy Vol. 2 star said that part of the problem is a lack of trust in female leadership. “It’s like the moment a woman gains some kind of position of power, she will be questioned,” she said.

By holding women to an unfair standard, Saldana said, “It’s almost like you’re trying to prove our incompetence.”

Citing Hillary Clinton as an example, Saldana said she “found it really offensive” that the Democratic nominee was made to seem “incompetent” over the handling of her email server.

“I’m just like, ‘People, she’s up against a man that calls women pigs on national television and she’s incompetent?’ There’s a big problem here and we have to address this pink elephant in the room. And it has to do with sexism in America,” she said.

Fortunately, Saldana said this election has driven her and many others to become more informed. “I know that people took a lot of things from this election,” she said. “I want to learn from everything.” 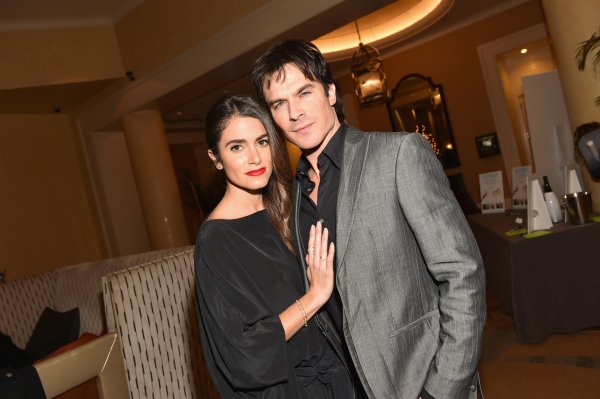 Nikki Reed and Ian Somerhalder Are Expecting Their First Child
Next Up: Editor's Pick