President Donald Trump smiles while speaking during a press conference in the Rose Garden of the White House on May 4, 2017.
Andrew Harrer—Bloomberg/Getty Images
By Abigail Abrams

The civil rights group said Thursday it would not file a lawsuit against the president’s order aimed at weakening prohibitions on political activity by religious organizations because they believe it has “no discernible policy outcome.”

“Today’s executive order signing was an elaborate photo-op with no discernible policy outcome. After careful review of the order’s text we have determined that the order does not meaningfully alter the ability of religious institutions or individuals to intervene in the political process,” ACLU Executive Director Anthony D. Romero said in a statement.

While celebrating National Day of Prayer on Thursday, Trump signed the order, which asks the IRS to use “maximum enforcement discretion” on a rarely-applied regulation known as the Johnson Amendment. The amendment bans tax-exempt organizations like churches and other religious institutions from political speech and activities.

“This financial threat against the faith community is over,” Trump said in the White House Rose Garden. “No one should be censoring sermons or targeting pastors.”

During his campaign, Trump promised to repeal the Johnson Amendment. His executive order does not repeal the amendment, according to the Associated Press, but rather addresses enforcement and promises “regulatory relief” for groups with religious objections to requirements in the Affordable Care Act such as the mandate to pay for contraception.

“The directive to federal agencies to explore religious-based exceptions to healthcare does cue up a potential future battle, but as of now, the status quo has not changed,” Romero added in the statement. “What President Trump did today was merely provide a faux sop to religious conservatives and kick the can down the road on religious exemptions on reproductive health care services.”

The ACLU said that while it has chosen not to sue the Trump administration right now, it will sue his administration if the order triggers any future government action. 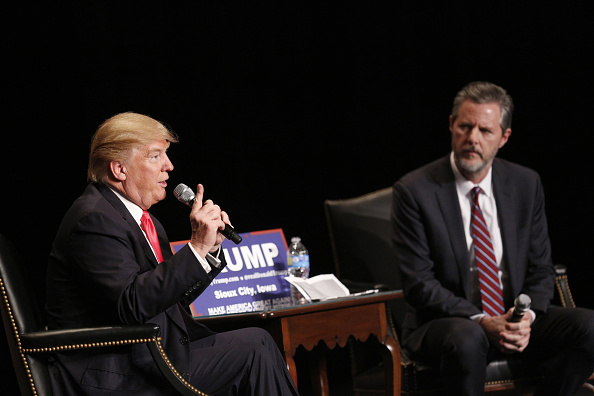