The comedian, known for hosting his self-titled talk show and playing a variety of oddball characters on TV, struggled with mental illness for nearly 20 years and has even attempted to take his own life. He’s seen the pain the longtime battle has caused his closest loved ones.

“Suicide is perhaps one of the least funny topics there is,” Gethard, 36, tells TIME.

So when the Broad City actor decided to shelve his best jokes for three years to create a stand-up special centered solely on his experiences fighting depression, alcoholism and suicidal thoughts, he knew he was risking a career he’d worked hard to build since his early days as a guest writer for Saturday Night Live.

“There is this feeling that we shouldn’t talk about this stuff, that it should be kept behind closed doors, and I think those are pretty old-school attitudes,” Gethard says. “People are needlessly suffering and sometimes dying, and it’s such a shame that people choose to remain sick because they feel like they shouldn’t talk about it.”

The number of youngsters admitted to U.S. children’s hospitals over suicidal thoughts or actions more than doubled in the last 10 years, a new study has found. There have been more than 118,000 such visits at 32 children’s hospitals across the country between 2008 and 2015, according to the new research, which will be presented at this year’s Pediatric Academic Societies Meeting in California this weekend. Dr. Gregory Plemmons, the study’s lead author, called the rise “alarming” and urged for more awareness.

Gethard, a New Jersey native who now lives in New York City, says he used to make surface-level jokes about his anxiety and depression on The Chris Gethard Show. But he never discussed it in-depth — up until a message from an anonymous fan in 2012 turned his relatively private life around.

The unnamed fan asked Gethard if the TV host had ever considered killing himself, writing that he or she was in a “bad place” and needed advice. Gethard — in a nearly 7,000-word response posted on the show’s Tumblr page — revealed that he too has had suicidal thoughts, but he told the fan not to lose hope.

“It was kind of head-spinning,” he recalls of that moment. “The cat’s out of the bag now.”

The exchange prompted Gethard to rethink his priorities. He tested the waters with small audiences in familiar venues at home, swapping small jokes about his “weird-looking” appearance for stories about his depression diagnosis.

“At the end of the day, people would come up to me after the show and say, ‘That really sounds like my experience. Thank you.’ People saying, ‘I understand my son a little better.’ You start to hear enough things like that, and you think you kind of have to go all in,” Gethard says.

“I have a very small platform in life as an entertainer,” he adds. “If you have a chance to do something good and you just opt to not to do it because you’re strategizing about your career, I would never forgive myself.”

What followed was a roughly hour-long, one-man emotional rollercoaster of a comedy special, which is set to premiere on HBO on May 6. Executive produced by Judd Apatow, Chris Gethard: Career Suicide is an adaptation of Gethard’s off-Broadway show of the same name, which ran in New York City for about three months up until January. As he delves into the intimate details of his life, Gethard periodically pivots to a joke to relieve intense or sad moments. Just when the audience appears on the verge of crying, they laugh instead.

“I think laughter is kind of the sugar that helps take the medicine down. You say it without the jokes and it’s very scary,” Gethard says.

The comedian says “putting this thing out in the world” has created an “unprecedented level of anxiety and paranoia” about how audiences will receive his message. He’s also concerned about becoming known as “the depressing guy,” especially at a moment in his career when he is just getting exposure (his talk show was also just picked up by truTV) — but that doesn’t change his main motivation.

“There is certainly a fear of mine, especially because I’m still an underground guy,” he added. “But there are people out there who think maybe their own brain is their worst enemy, and hopefully people watch it and those people feel a little less alone.” 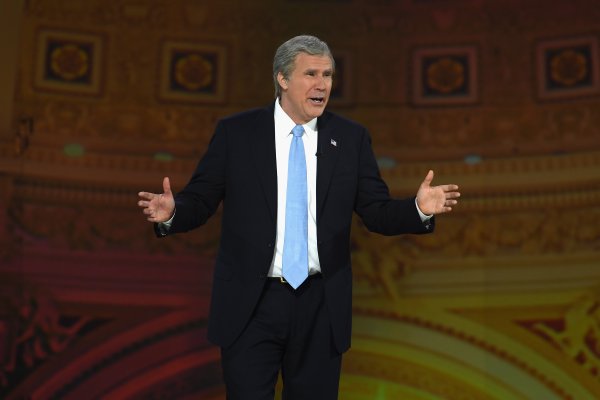 Will Ferrell Revives Bush Impression: 'The Prodigal Son Has Returned'
Next Up: Editor's Pick