Towns-Miranda and Kerry discussed the issue of depression among mothers, both in the U.S. And globally, in a panel conversation moderated by TIME/Motto editor Claire Howorth.

Both Towns-Miranda and Kerry slammed President Donald Trump’s plans to reduce United Nations funds for family planning — in January, he reinstated the Mexico City Policy, which prohibits federal funds from being offered to international groups that perform or provide information about abortions.

“I’m horrified,” said Towns-Miranda, who is on the Planned Parenthood Action Fund board. “To deprive the U.N. and other women across the world of basic healthcare around reproductive rights I think is a crime.”

Kerry, the daughter of former Secretary of State John Kerry, added: “If we don’t make these investments, we’re going to be far worse off than we are. [The funds repeal] is really about political calculation and about making some sort of quick message to some base that doesn’t live in a world of data or science or fact.”

Towns-Miranda also called for a change in the way we talk about mental health. “A conversation has to begin in which the word ‘crazy’ isn’t used, because we all struggle and have problems in living and have stresses,” Towns-Miranda said. “I always refer to therapy as ‘technical assistance.’ Everybody needs a little technical assistance in managing their lives.” She encouraged parents to nurture their children’s strengths, weaknesses and sensitivities, describing son Miranda as an “exquisitely sensitive” child. “At the point at which he had his first major breakup with a significant other, the technical assistance kicked in,” she added.

Kerry spoke about her own family, specifically her mother Julia Thorne’s book, You Are Not Alone: Words of Experience & Hope for the Journey Through Depression, about Thorne’s struggle with depression and the suicide of her close friend.

“This close friend didn’t tell anybody they were depressed and didn’t share it and it was a pride issue to some degree. She realized she had held onto her own story of depression and her suicidality for a long time without talking about it,” Kerry said. “For me it was a really powerful lesson about speaking out about something you believe in, and making it okay to speak a truth about something that’s really hard.”

Kerry, too, called for more open conversation. “We are living in a time of intense uncertainty and intense disruption, and I can guarantee you the anxiety and the fear and the depression that people are feeling is probably on the rise right now — regardless of your politics,” she said. “If we reach out and talk about it, we are all going to be stronger for it.” 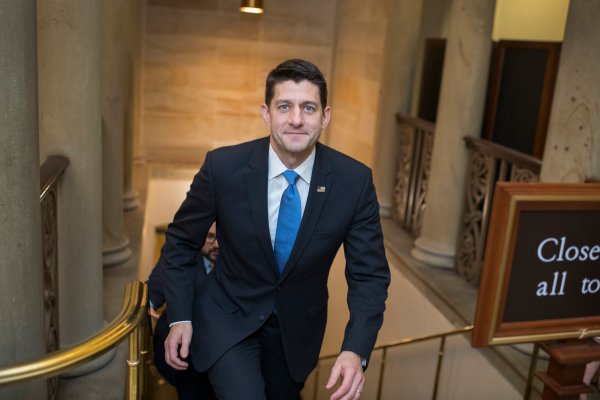 The GOP’s Health Care Bill Could Make Being a Woman a Pre-Existing Condition
Next Up: Editor's Pick