This Is the Pivotal Moment in the Fight Against Climate Change

Sea ice is seen from NASA's Operation IceBridge research aircraft off the northwest coast on March 30, 2017 above Greenland. According to NASA scientists and the National Snow and Ice Data Center (NSIDC), sea ice in the Arctic appears to have reached its lowest maximum wintertime extent ever recorded on March 7.
Mario Tama—Getty Images
By Justin Worland

Momentum is building in the Trump administration to leave the Paris Agreement on climate change in the coming weeks — which would put the global climate deal in danger of becoming a largely symbolic pact, rather than a meaningful move that slows the pace of global warming.

Reports that the U.S. might soon leave the Paris Agreement — the decision is far from final, but the Trump administration appears closer to leaving than it had previously — have prompted an outcry from government officials around the world, including the European Union and NATO, along with environmental groups, just as diplomats are set to meet to discuss climate change in Bonn next week. A U.S. exit would not necessarily doom the deal, but it would significantly undermine its credibility and further diminish the chances the world will meet the agreement’s target of keeping global temperatures from rising more than 2°C (3.6°F) by 2100.

“If one nation, especially the biggest nation … if they do not recognize a problem, then we will have trouble dealing” with climate change, General Denis Mercier, NATO’s supreme allied commander for transformation, told Reuters.

In the White House, the exit camp has argued that remaining in the deal would threaten Trump’s domestic energy agenda. The Paris Agreement relies on voluntary non-binding commitments, and countries face no explicit penalty for failing to meet them, but lawyers in the Trump administration disagree about whether the countries can weaken their commitments. Some Trump administration officials believe it’s better to withdraw than to be stuck with commitments that conflict with Trump’s energy plans, since falling short of commitments without formally exiting the deal could leave the federal government vulnerable to legal challenges.

White House Press Secretary Sean Spicer said that a decision would come before the G7 summit at the end of this month, and Trump teased an announcement at a Pennsylvania rally last weekend.

The debate over whether the target can be weakened under the terms of the Paris Agreement centers on a single sentence: “A party may at any time adjust its existing nationally determined contribution with a view to enhancing its level of ambition.” The interpretation of that sentence has divided lawyers and policy experts, including within the Trump administration. State Department lawyers have said that the U.S. faces few legal obligations under the agreement and can revise commitments downward. White House counsel Don McGahn reportedly believes otherwise.

The confusion over the sentence has left many environmentalists taking the surprising view that the U.S. is in fact able to revise its commitment downward, even if that’s not in keeping with the spirit of the deal — because, to them, anything is better than the U.S. withdrawing entirely. The Sierra Club argued in a leaked memo that it would be “extremely difficult” to challenge a move to weaken U.S. commitments in court. Former French climate change envoy Laurence Tubiana, a key framer of the Paris Agreement, said in a tweet that “of course US government CAN legally downsize its contribution but SHOULD Not.”

President Obama committed the U.S. to a 26-28% reduction in annual greenhouse gas emissions by 2025 from 2005 levels and instituted a number of measures to try to meet that goal, including the Clean Power Plan, which would have required states to reduce their carbon dioxide emissions. Trump has targeted that regulation, along with a slew of others. An analysis of the policies Trump has enacted, from the Resources for the Future think tank, shows that the U.S. is likely to see no more than a 12.6% decline in greenhouse gas emissions.

Diplomats hammered out the Paris Agreement over decades of negotiation and officials across the globe say they will not abandon it if the U.S. leaves, but a lack of American involvement would weaken the deal’s credibility and undermine its objective. “I don’t think the Paris Agreement is going to fall apart even if the U.S. walks away from it,” Todd Stern, the chief U.S. climate change negotiator under Obama, said earlier this year. “They wouldn’t want to give the Trump administration the satisfaction of being able to kill Paris.”

But nonetheless, the withdrawal of the world’s second-largest emitter and largest economy would inevitably disrupt progress at cutting global greenhouse emissions. Moreover, it would create an awkward dynamic at high-level international gatherings like the G7 and G20 summits. Last month, the U.S. position on climate change doomed a joint statement from the G7 countries at an energy summit, an unusual sign of discord on an issue that had been key to international collaboration.

“The U.S. will be fighting the rest of the world at all of these meetings and it will get in the way,” says John Coequyt, the Sierra Club’s global climate policy director.

In Bonn, where diplomats from around the globe will gather next week for their biannual climate change meeting, the uncertainty will distract from discussions about how to implement the agreement. The U.S. will be represented by State Department diplomats and will continue to play a leadership role — at least in theory — in discussions on transparency, a key provision of the agreement. “The question [is] whether this creates a difficult backdrop for the negotiations,” says Paula Caballero, global director at the climate program at World Resources Institute. “The answer is clearly yes.” 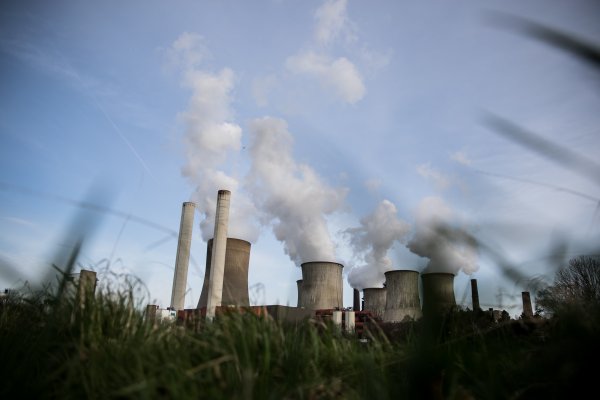 Meet the Republicans Taking on Climate Change
Next Up: Editor's Pick