Donald Trump may say teachers are important, but he spent his first 100 days undermining the schools most educators work in —America’s public schools.

One of President Trump’s first acts was to appoint the most anti-public education person ever to lead the Department of Education. Betsy DeVos has called public schools a “dead end” and bankrolled a private school voucher measure in Michigan that the public defeated by a two-to-one ratio. When that failed, she spent millions electing legislators who then did her bidding slashing public school budgets and spreading unaccountable for-profit charters across the state. The result? Nearly half of Michigan’s charter schools rank in the bottom of U.S. schools, and Michigan dropped from 28th to 41st in reading and from 27th to 42nd in math compared with other states.

Now DeVos is spreading this agenda across the country with Trump and Vice President Mike Pence’s blessing. They’ve proposed a budget that takes a meat cleaver to public education and programs that work for kids and families. After-school and summer programs — gone. Funding for community schools that provide social, emotional, health and academic programs to kids — gone. Investments to keep class sizes low and provide teachers with the training and support they need to improve their craft — gone. Their budget cuts financial aid for low-income college students grappling with student debt at the same time the Trump administration is making it easier for private loan servicers to prey on students and families.

The Trump/DeVos budget funnels more than $1 billion to new voucher and market strategies even though study after study concludes those strategies have hurt kids. Recent studies of voucher programs in Ohio and Washington, D.C., show students in these programs did worse than those in traditional public schools. Further, private voucher schools take money away from neighborhood public schools, lack the same accountability that public schools have, fail to protect kids from discrimination, and increase segregation.

It’s dangerous in education when the facts don’t matter to people. But it doesn’t stop there. Schools must be safe and welcoming places for all children, and that’s a belief shared both by parents who send their kids to voucher schools and those who send their kids to public schools. But Trump and DeVos have acted to undermine the rights of kids who look or feel different, and to cut funding for school health and safety programs.

What Trump and DeVos are doing stands in stark contrast to the bipartisan consensus we reached in 2015 when Congress passed a new education law that shifted the focus from testing back to teaching, pushed decision-making back to states and communities, and continued to invest funds in the schools that need it the most. It offered an opportunity to focus on what we know works best for kids and schools—promoting children’s well-being, engaging in powerful learning, building teacher capacity, and fostering cultures of collaboration.

The Trump/DeVos agenda not only jeopardizes that work, their view that education is a commodity as opposed to a public good threatens the foundation of our democracy and our responsibility to provide opportunity to all of America’s young people.

Americans have a deep connection to and belief in public education. I see it every day as I crisscross the nation talking to parents, teachers, students and community members about what they want for their public schools. And it transcends politics. It’s one of the reasons we saw such a massive grass-roots response to the DeVos nomination from every part of the country.

A recent poll by Harvard and Politico showed that while parents want good public school choices to meet the individual needs of their kids, they do not want those choices pit against one another or used to drain money from other public schools. In other words, the DeVos/Trump agenda is wildly out of step with what Americans want for their kids.

It’s what I saw when I took DeVos to visit public schools in Van Wert, Ohio, last month. This is an area that voted more than 70 percent for Trump, but people there love and invest in their public schools — from a strong early childhood program, to robust robotics and other strategies that engage kids in powerful learning, to a community school that helps the kids most at risk of dropping out stay on a path to graduation. It’s what I saw at the Community Health Academy of the Heights in New York City where the school provides a full-service community health clinic, in-school social workers, a food pantry, parent resource center, and other services for parents and kids. And it’s what I saw this week at Rock Island Elementary School in Broward County, Fla., where kids participate in robotics programs after school, where there is a library in every classroom and a guided reading room where kids can build their literacy skills. The great things happening in these schools are all funded by federal dollars and threatened by the Trump/DeVos budget.

Many of those who voted for Trump did so because they believed he would keep his promise to stand up for working people and create jobs. They didn’t vote to dismantle public education and with it the promise and potential it offers their children. Now, the person who ran on jobs and the economy seems intent on crushing one of the most important institutions we have to meet the demands of a changing economy, enable opportunity and propel our nation forward. That’s one of the biggest takeaways from Trump’s first 100 days. 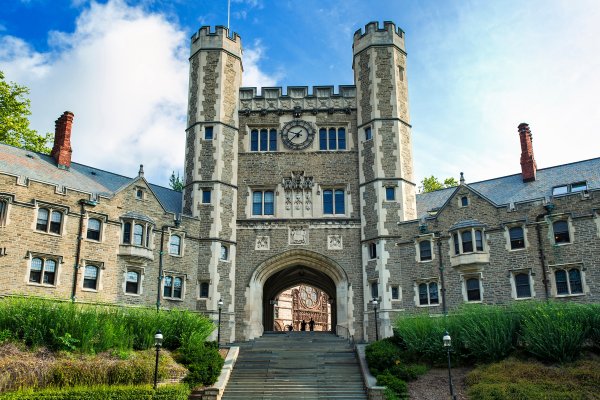 The Most Beautiful College in Every State
Next Up: Editor's Pick