The Feminist History of Women and Tattoos

Since the election, Jess Koala, a tattoo artist at Black + Blue in San Francisco, has seen an uptick in the number of clients looking to get feminist tattoos. She’s inked women with Elizabeth Warren’s face, a gravestone memorializing the death of gender roles and more than a handful of Venus symbols.

“I think people are just trying to wear their ideals as a badge of honor,” Koala told Motto. “It’s permanent — you’re making a very clear statement: ‘This is what I believe in, this is who I am.’ That just fits very naturally with activism.”

Koala’s clients aren’t alone. In February, more than 100 women lined up at a Minneapolis shop to get a variation of “Nevertheless, she persisted” tattooed on their bodies in homage to Warren after she was silenced by Senate Majority Leader Mitch McConnell for attempting to read a letter written by Coretta Scott King to oppose the confirmation of Attorney General Jeff Sessions. Ahead of the Women’s March on Washington, several women got inked with slogans of the resistance, including “rise” and “solidarity.” And many women sought out “nasty woman” tattoos after Donald Trump used the insult to refer to his opponent, Hillary Clinton, at the final presidential debate.

Though these “nasty woman” tattoos may have made recent headlines, feminist body art is not a new trend. In fact, tattoos have long served as a symbol for female empowerment and sparked discussions about ownership of women’s bodies.

Margot Mifflin, a professor of English at Lehman College of the City University of New York, chronicled the relationship between women and ink in her book Bodies of Subversion: A Secret History of Women and Tattoo, which was originally published in 1997. In the 19th century, tattoos were a popular accessory for wealthy socialites. That fad died down in the early 20th Century, according to Mifflin, and body ink subsequently emerged as a symbol of masculinity — with many parlors often refusing to tattoo women unless they were married and accompanied by their spouse.

But, as Mifflin told Motto, that changed in the 1970s when the counter-culture and feminist movements led to a spike in the number of women getting tattoos. In the 1990s, Mifflin said, more breast cancer survivors began to use body art to cover their mastectomy scars, which has continued today.

“I theorize in my book that it was about reasserting claim over their bodies during a time when women’s bodies issues were so prominent in the media from discussions and debates over breast cancer, eating disorders, cosmetic surgery, motherhood and abortion,” Mifflin said. “I think that tattoos became a way for women to take control of their own bodies and define them how they wanted to.”

In the late 20th century and early 21st century, tattoos became less of an act of resistance and more of a permanent part of pop culture. But while more men and women got tattoos, men were cast as cool while women rocking ink were branded as dangerous or promiscuous (see: tramp stamps). That lingering perception hasn’t stopped women from embracing body art: a 2012 poll found that more women than men have tattoos.

But women still lag behind when it comes to working behind the chair. While there isn’t a lot of concrete data on the gender ratio of tattoo artists across the country, Mifflin said that more women have broken into the historically male-dominated industry, especially in the 21st century. She attributed the rise of women in the industry to the popularity of tattoos and the visibility of other female tattoo artists, like Kat Von D.

“It still is quite dominated by men but not nearly as much as it used to be. There are many more female tattooists out there, and there’s been a growing number since the new millennium,” Mifflin said. “That also changes tattooing for women because when you have women designing and applying the tattoo, you have a greater consideration for women’s bodies and the designs of the tattoos on them.”

That’s been true for Kelsey Rogers, the owner and lead artist at the all-female tattoo shop Ink Ink in Springfield, Missouri. Rogers told Motto that while she’s seen the post-election feminist tattoos popping up everywhere on social media, her shop has been inking women with empowering statements for years. “To us, it’s not a new fad,” Rogers said. “It’s always been there — probably because they felt at home getting those tattoos with us.”

But, like in most industries, female tattoo artists inevitably still face sexism. “I have gone to some tattoo conventions and other tattoo artists will ask if we’re the girlfriends of the shop. Having our entire business run by women, a lot of people just think we’re a joke.”

Stephanie Tamez, a tattoo artist at Saved Tattoo in Brooklyn, told Motto that she decided to work twice as hard to shake off any ideas that she might be less skilled than her male colleagues. “I think if you speak to every woman, they’re going to have a different story for how being a woman in this industry has shaped them,” Tamez said. “I think people really realize that you don’t have to be a big dude to give a great tattoo… A lot of artists are getting involved and it’s really changing the dynamic.”

And Koala added that she anticipates that the industry will continue to get better for women as more women seek out feminist tattoos and more self-proclaimed feminists get into the business of body art.

“I see a lot of amazing women artists out there and I’m just really excited to see them thrive. I think it’s really important that younger women know this is something that they can get into and there are so many incredible role models out there for women now,” she said. “I think we’re really living in an amazing time.” 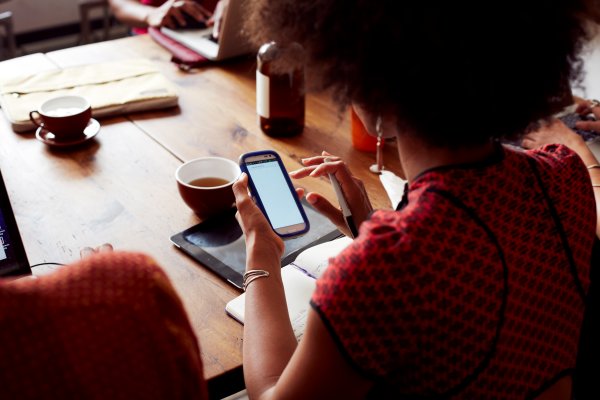 How to Find the Best Period-Tracking App for You
Next Up: Editor's Pick