President Trump is Tweeting From the Sidelines, Again

When a frustrated President Trump called on Tuesday for a shutdown of the government and an end to the legislative filibuster in the Senate, the response from lawmakers in his own party was swift, and final: No.

“That will not happen,” said Senate Majority Leader Mitch McConnell.

“It’s important we govern, and not just shut down the government,” said Republican Sen. John Cornyn of Texas.

Trump is a president who dreamed big: of beautiful border walls, of repealing a popular health care law that has added around 20 million to insurance rolls and replacing it with something terrific, of major cuts to domestic spending, of massive boosts to the military.

But over the first three months of his presidency, Trump has struggled to grapple the realities of governing. The legislative process is arduous and slow, governed by rules and compromise, not by executive fiat. More than 103 days into his tenure, Trump has little to show for his negotiating skills and business acumen.

Instead, Trump has managed to stir up the ire of members of his own party and shown himself to largely be a sideshow in many of the battles in Washington. He has become a gadfly, tweeting from the bench.

“I do wish somebody would take his iPhone away from him,” Republican Sen. Bob Corker of Tennessee told reporters.

The bipartisan spending package hashed out last weekend was settled despite, not because of, the President’s repeated intrusions and sniping tweets. McConnell, Minority Leader Chuck Schumer of New York, House Speaker Paul Ryan and House Minority Leader Nancy Pelosi, along with the two leading appropriators in each chamber, worked out spending levels largely without the President’s input.

The bill included a raft of measures that the President has opposed, including increased funding for the National Institute of Health, money for the EPA and withholds $2.5 billion in defense funds until the White House puts a plan to fight ISIS together. Democrats boasted about the bill and called it a win, and congressional Republicans said they were happy with the agreement, too.

“It shows that we Democrats want to work with our Republican colleagues and when they work with us it’s great,” said Schumer. “Unfortunately the president did not play much of a positive role in these budget negotiations.”

On healthcare and taxes, there has been little movement in Congress, despite the President’s entreaties. Trump’s biggest achievement of the first 100 days, the confirmation of Neil Gorsuch to the Supreme Court, happened largely due to the determination of McConnell, who held the seat open last year and then cruised over Democratic objections to end the filibuster for Supreme Court nominees.

Presidents have long had their tensions with Congress, and much of the dirty work of government happens without the President. When presidents insert themselves, they often fail. President Obama, at the beginning of his second term, was unable to push Congress to pass a bill tightening gun laws; President Bush, late into his second term, failed to convince Congress to privatize Social Security.

But rarely has a president so early failed to make progress on major legislation and been rebuked so openly by members of his own party.

On health care, Trump’s repeated lobbying of Republicans, including meetings at the White House and public pressure on Twitter of specific members, did not stave off the failure of the bill. Now as Republicans seek to renegotiate their proposal, the President has largely removed himself from the conversations, letting Congress settle it without his input.

Trump’s idea of a government shutdown on Tuesday was largely mocked on Capitol Hill, with Democrats lambasting the president for threatening it and Republicans dismissing it as politically damaging. His call for an end to the legislative filibuster in the Senate and for a “good shutdown” was the result of “frustration,” said his White House budget director Mick Mulvaney.

“I think what you heard this morning was his sense of frustration over how he’s being mistreated by the Democrats on a bipartisan piece of legislation,” Mulvaney said.

In Congress, patience for the President’s tweeting habits ranges from frustration to ignorance.

“Shutdown? For what? I didn’t know he said we were going to shut down in September,” said a genuinely befuddled Republican Sen. Pat Roberts of Kansas. “Why? I don’t know why he wants to shut down.”

Some Republicans like Arizona’s Sen. Jeff Flake, who is up for reelection in 2018, have been pointed about their disagreements with the President.

President Trump is getting a lesson in civics, Democrats say. “I think he needs to understand our democratic system and our separation of branches,” said Democratic Sen. Ben Cardin of Maryland. “This is not running a business this is running a country.”

But for the president, the big dreams—of fences and bombs, gleaming new highways and touched-up airports—will not die. He is soldiering on, with an eye on the 2018 elections, and on forcing his agenda in through the next government spending bill in September.

It will just have to go through Congress first.

“I don’t know if he had any illusions,” said McCain, “but we have three co-equal branches of government.” 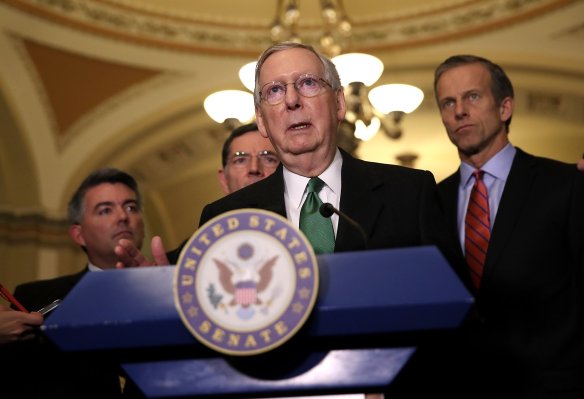