The Story Behind the Viral Photograph of a Policeman on Fire

French CRS anti-riot police officers are engulfed in flames as they face protesters during a march for the annual May Day workers' rally in Paris on May 1, 2017.
Zakaria Abdelkafi—AFP/Getty Images
By Olivier Laurent

The photograph is commanding. As anti-riot police officers patrol the streets of Paris, one of them is hit by a Molotov cocktail during the May Day protests in Paris. Six-foot-high flames engulfed the man as several of his colleagues recoil from the intense fire.

The photograph made the front pages of the New York Times and the Wall Street Journal, as well as many other newspapers across Europe. Its creator: Zakaria Abdelkafi, a photographer with Agence France-Presse and a Syrian refugee, who was forced to flee his country in 2015.

On May 1, Abdelkafi was covering the protest, following a group of people that had chosen to hide their faces under hoodies and behind bandanas.

“I always follow them because, from past experience, I know they always cause trouble,” he says in a recorded interview with AFP. “They’re very violent.”

Over the past week, as Abdelkafi covered protests against the two leading presidential candidates, he’s also fallen victim to their attacks.

“Several times, they pushed me down to the ground and beat me,” he says.

Yesterday, as the demonstrations started taking a turn for the worse, Abdelkafi positioned himself between the protesters and members of the police force called CRS — for Republican Security Companies. As projectiles started flying toward the police officers, “I thought to myself how the police were really the victims here,” says Abdelkafi, “because these guys were attacking them. They were throwing stones and glass bottles at them, anything that they could get their hands on.”

“I saw the fire and I just snapped away,” he says. “I kept on following the policeman who was burning. In that picture, he is trying to kick a tear gas canister back at the demonstrators.”

“The officers around him were screaming, too,” he says. “That policeman really touched me. He was being burned alive in front of me. And the demonstrators, they didn’t care. They kept throwing things at the police.”

The photographer hopes he’ll be able to meet with the police officer.

“I would like to go see him in the hospital and bring him flowers,” says Abdelkafi, who lost an eye when covering the war in his native Aleppo.

That was two years ago. It changed his life, bringing him to Paris, where he received his asylum and a job at AFP. 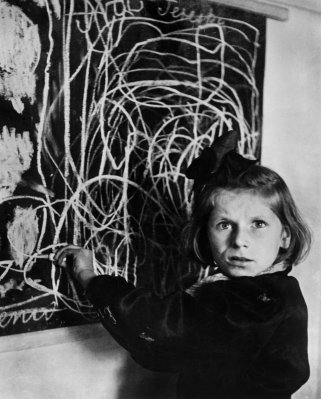 Unraveling a 70-Year-Old Photographic Mystery
Next Up: Editor's Pick