ET correspondent Carly Steel woke up to find that a photo of herself reacting to Tom Brady and Gisele Bündchen at the Met Gala had gone viral.

The photograph of her internet-winning reaction to the co-chairs kissing was taken at the 69th annual ball held at New York’s Metropolitan Museum of Art Monday night, where she was conducting red carpet interviews.

The second she laid eyes on the supermodel and her football star husband, she instantly felt it was a moment of “genuine affection on the carpet.”

“I think I was living vicariously. I had many thoughts running through my mind. The first was, is this Westworld? How can two people be so perfect?” she told TIME, joking that the power couple is something that Dr. Ford might create to amuse the guests of the artificial theme park on the hit HBO show.

At first she hoped for a quick interview, but the funny TV correspondent decided she wasn’t interested.

“I thought ‘Oh I hope they come over so I can interview them,’ because I always love to talk to Tom Brady. But then I realized, ‘No, I don’t want Gisele to come over, because she looks so amazing, so I don’t want to stand next to her.'”

Steel wore a dress by acclaimed designer Christian Siriano, and the headgear was a carefully considered decision.

“I didn’t want Christian to feel like I ruined his look with a crazy headpiece and never work with me again,” she said, so she asked for Siriano’s approval, and she got it. “I thought this was the perfect opportunity to wear a crown. Game of Thrones!”

When the queen briefly removed the crown, so it didn’t obstruct her team’s camera, music legend Celine Dion was there to put it back in its rightful position on her head. 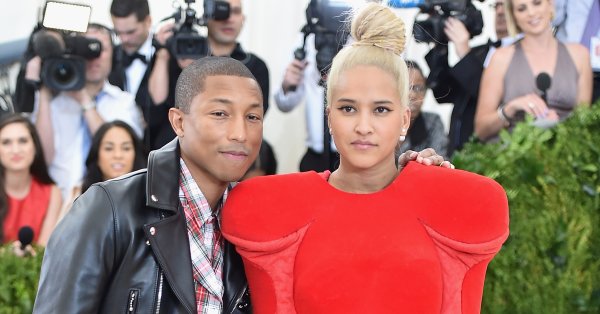 The Internet Has Lots Of Ideas About What Helen Lasichanh's Met Gala Outfit Looks Like
Next Up: Editor's Pick