GraphicaArtis—Getty Images
By Olivia B. Waxman

As summer nears, many Americans may be getting ready to change their closets for the new season, making room for the more colorful clothing that goes with the warm weather. Amid all that excitement, it’s easy to forget that middle-class Americans have really only been wearing colorful clothes regularly for less than a century.

“There was a practical element to the lack of color pre-1920, because colorful clothes got dirtier quicker,” says Deirdre Clemente, fashion historian and professor of history at the University of Nevada, Las Vegas. On the one hand, the ability to wear color was seen as a sign of wealth, as royals and elites who didn’t have to worry about getting dirty could dress as brightly as they pleased. (For example, the first synthetic dye that could stick to fabric was purple, which started a “purple craze” in the late 1880s.) On the other hand, colorful clothing worn by people who were not well-to-do came to be seen as “immoral” and “gaudy,” something that only prostitutes in cities would do to attract attention to themselves at the turn of the century.

All of that began to change by the 1930s. With the rise of middle-class leisure time and tourism that accompanied the institution of the 40-hour workweek, the sportswear industry began to grow. Thus were vibrant colors and big floral prints introduced to mass fashion. Resorts throughout South Florida became a go-to place for manufacturers to test-drive colors and patterns, Clemente says. (It was during the period of time that young women started to wear shorts, too.)

Fabric quality, however, had not yet caught up to America’s desire to wear crazy colors. Dyed natural fibers were “very light sensitive” and “faded easily,” meaning “some dye stayed on one part of the fiber longer than another part,” Clemente says. Early synthetic fibers didn’t keep color well either.

Scientists tried to come up with a better formulation. In the 1930s, a better, but yet not ideal, formulation of rayon was developed — but during World War II, consumer clothing production in the U.S. basically paused. Rationing meant there was nowhere to buy popular fabrics like nylon and velvet, and even wedding dresses were made out of anything from curtain fabrics to nylon parachutes.

Demand for the perfect colorful clothing came back in full force during the period of post-war prosperity between 1947 and 1970, when the U.S. median family income nearly doubled, the gross national product more than quadrupled. Consumer spending also grew from $143.4 billion to $617.6 billion, accounting for approximately two-thirds of the GNP.

“It was a time when, finally, you could afford more fabrics,” Rafael Gomes, Director of Fashion Exhibitions at SCAD FASH Museum of Fashion + Film. And thanks to an influx of R&D money from the war, companies had finally started developing the right kind of synthetic fiber to keep up with this demand. “They start pushing new fabrics like Orlon, and start taking these new dyes that scientists had developed, and these new synthetic fibers take the dye, and the fabrics are washable and keep the color.” (LIFE magazine featured DuPont advertisements for Orlon acrylic and Dacron that touted the fabrics as “care-free,” “wrinkle-resistant,” and “the new blueprint in fashions.”)

Even color television was “greatly influencing designers and the amount of color they used,” says Gomes, as consumers became more used to seeing celebrities on TV wearing color. For example, the image of Dorothy’s shimmering ruby red shoes in The Wizard of Oz made people want to wear vibrant color, according to Gomes, who explains that while the shoes were originally silver in L. Frank Baum’s novel, their color was changed for the 1939 movie version “to make the most of the new Technicolor film process.” He also points to the “Rainbow” sandal that Salvatore Ferragamo created for Judy Garland in 1938 as a sign of the times, influenced by advancements in technicolor.

“From the 1960s on, people reveled in being able to see their favorite stars in color,” he says. “This had great influence on the general public, especially the new consumer group: the teenagers.” 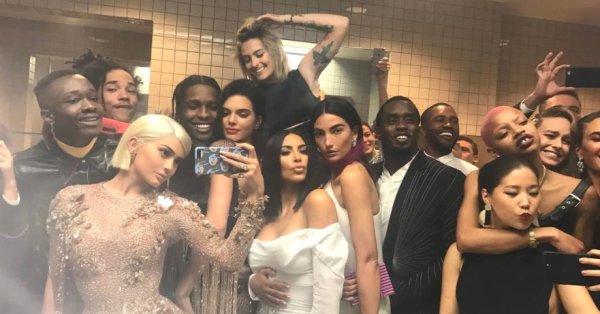 See All the Best Photos From the Met Gala After-Parties
Next Up: Editor's Pick