Japan has dispatched a warship to guard a U.S. supply vessel as it maneuvers through the country’s waters, flexing new powers for the first time since Prime Minister Shinzo Abe broadened the scope of defense activities early last year.

The Japan Times reports that the Izumo, the nation’s biggest warship, will escort the American vessel as it makes its way to refuel naval fleet in the region.

The American ship will provide fuel and supplies for the USS Carl Vinson strike group, a nuclear aircraft carrier and escort fleet that recently arrived in the Sea of Japan amid rising tensions between the U.S. and North Korea.

Izumo, measuring some 249 meters long with a capacity to operate up to nine helicopters, is primarily designed for anti-submarine warfare. Designated as a destroyer, the Times reports that the ship is the biggest to be dispatched by Japan’s defense ministry since World War II, and the first to carry out peacetime protection tasks.

Abe has come under criticism for what some see as his hawkish interpretation of the country’s pacifist constitution. His amendments to Japan’s security laws, passed in 2015 and in effect since March of last year, enable the country’s Self-Defense Forces to aid allies who come under attack and broaden the scope of tasks they can perform overseas.

While previously limited to defending their own assets, Japanese troops can now be deployed to guard equipment belonging to allies. Under new guidelines that followed the legislation, the U.S. may request an escort from Japan’s Self-Defense Forces, according to the Times.

On Saturday, North Korea attempted its latest ballistic missile test as tensions simmer between Washington and Pyongyang over the latter’s accelerating progress on its nuclear weapons program. While the test was a failure — the second in as many weeks — Abe warned that the attempt was “absolutely not acceptable.” 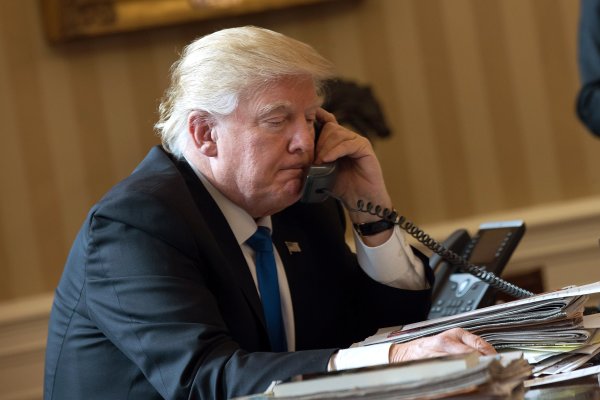