President Donald Trump once again referred to Massachusetts Senator Elizabeth Warren as “Pocahontas,” this time before a crowd at a convention for the National Rifle Association.

“Only one candidate in the general election came to speak to you and that candidate is now the president of the United States standing before you again,” he said at Friday’s address, as he became the first sitting president in more than three decades to speak before the NRA.

“I have a feeling that in the next election you’re going to be swamped with candidates,” he added. “You’ll have plenty of those Democrats coming over and you’re going to say, ‘No sir, no thank you, no ma’am, perhaps ma’am — it may be Pocahontas, remember that.”

Trump previously used the name of the Native American woman as a dig to describe Warren in the lead-up to 2016’s presidential election. Many have criticized his use of “Pocahontas,” including Minnesota Senator Al Franken, who once told CNN that Trump’s name-calling was “racist.”

Warren’s claim to Native American heritage has been a point of controversy in the past, according to the Washington Post, as it was disputed by her Republican opponent Scott Brown in the Massachusetts Senate race of 2012 and remains unverified by formal documentation.

However Warren has defended herself against attacks, writing in her 2014 book A Fighting Chance, “My brothers and I knew who we were. We knew our family stories.” 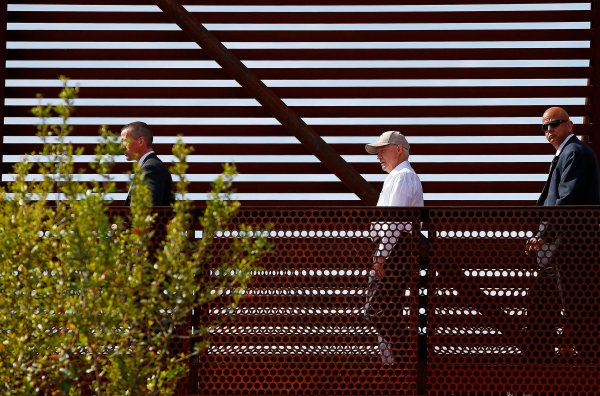 Arrests of Undocumented Immigrants Went Up During Trump First 100 Days
Next Up: Editor's Pick