Attorney General Jeff Sessions tours the U.S.-Mexico border with border officials in Nogales, Ariz. on April 11, 2017. A courthouse on the border in Texas is serving as a model for the kind of tough immigration enforcement advocated by President Donald Trump. “This is a new era. This is the Trump era,” Sessions said during a visit to the border in Nogales, Ariz., this month.
Ross D. Franklin—AP
By Maya Rhodan

Arrests of undocumented immigrants, both with and without criminal convictions, are up in the first 100 days of the Trump Administration when compared to last year.

According to statistics provided by Immigration and Customs Enforcement, a total of 35,147 arrests were made between January and March of 2017, up from 26,471 made in the first three months of 2016. The agency did not break down the statistics from Jan. 20 on, but the numbers they have provided to TIME show the Trump Administration is following through on its promise to crackdown on illegal immigration.

In his “contract with the American voter,” President Trump made a number of promises related to curbing illegal immigration, from funding the border wall to removing “the more than 2 million criminal illegal immigrants” from the United States. The president promised to get started on those measures and dozens more within his first 100 days in office.

The President will reach that milestone on Saturday and many of his immigration promises remain in flux. A leaked DHS report published in the Washington Post showed that the Administration is mulling plans to speed up hiring of immigration and border patrol officers and begin construction on parts of the promised border wall. But a fight over funds for Trump’s “big, beautiful” wall nearly shut down the government. Both of his executive orders banning travel to the U.S. from certain majority-Muslim countries have been stalled by the courts. And a federal judge recently dealt a blow to the president’s promise to crack down on so-called sanctuary cities by withholding funding.

But the statistics provided by ICE show that the Trump Administration has successfully taken the “shackles off” of enforcement officers who felt their work had been stifled under the previous administration.

“For those that continue to seek improper and illegal entry into this country, be forewarned,” Attorney General Jeff Sessions said during a recent stop at the southern border. “This is a new era. This is the Trump era.”

While the majority of those arrested had been convicted of crimes, there has been an increase in the number of non-criminals arrested so far this year. According to the numbers provided by ICE, 26,590 of the arrested immigrants had been convicted of crimes, or about 75.6%. Crimes range from sexual assault to DUI, according to ICE. In 2016, 85.9% of those arrested were convicted criminals, a total of 22,753 people. So far this year, ICE has arrested 8,557 non-criminals, which includes individuals who overstayed their visas or had been previously deported, up from 3,718 in 2016.

Though arrests are up, deportation statistics are on par with the previous year. ICE Spokesperson Jennifer Elzea says that’s because it takes time for actual removals to occur after an arrest in part due to the clogged immigration court system. Homeland Security Secretary John Kelly has also touted a dramatic decrease in migration across the southern border to the U.S. In March, apprehensions at the border with Mexico were down 64% from the year before.

The numbers do little to assuage immigration reform advocates fear that the Administration would target immigrants without criminal records, tearing up families and spreading fear in the wake, in order to increase deportations as the president has said he wanted. But the Administration maintains that it is focused on arresting and deporting the “worst of the worst” immigrants, including the gang members and violent offenders Kelly and Sessions have singled out in recent speeches.

Under President Trump’s immigration executive orders, nearly any immigrant found to be in the country illegally could be subject to removal. The president has said young immigrants who were granted special status under the Obama Administration should “rest easy,” but there have been reports of arrests and removals of so-called Dreamers who were brought to the country as children. And despite reports of arrests at courthouses, schools, and other locations many believe should be off limits to enforcement activities, Elzea says officers are cognizant of individuals’ needs.

“When carrying out the immigration law enforcement mission, ICE remains sensitive to the needs of victims and witnesses of crimes. ICE officers will take into consideration if an individual is the immediate victim or witness to a crime in determining whether to take enforcement action,” she said in a statement to TIME. “Particular attention is paid to victims of domestic violence, human trafficking or other serious crimes.”

Advocates say the Administration is going out of its way to demonize immigrants in order to justify the boost in enforcement activity. Reports have shown immigrants are not more prone to criminal activity than American-born citizens, but the Trump Administration is putting particular focus on immigrant violence with the launch of a new office that highlights the stories of victims.

“The Trump Administration has launched an unprecedented attack on the American idea that we should welcome immigrants and refugees, and build a stronger country in the process,” Frank Sharry, the executive director of the America’s Voice Education Fund, said recently. “They are using the cover story of ‘bad hombres’ as a smokescreen for a strategy that declares open season on each and every undocumented immigrant in America.” 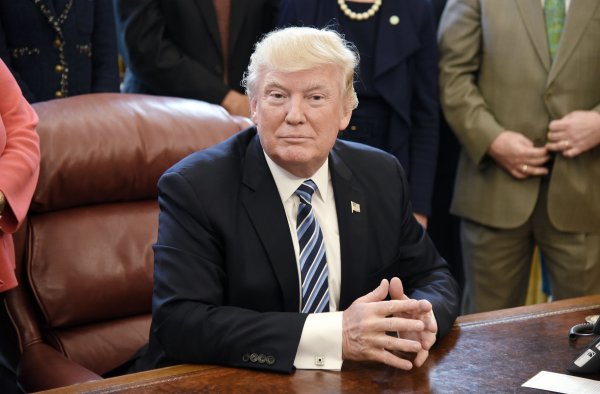