More than 2 million people were killed in the 1950-3 Korean War, including almost 40,000 Americans. Some 7,000 U.S. soldiers are still listed as missing. Countless families were torn apart by the conflict, which is still officially ongoing, as it was only ended by armistice rather than a peace treaty. It remains one of modern history’s longest wars.

These facts are important to remember when a U.S. President says, “There is a chance that we could end up having a major, major conflict with North Korea,” as Donald Trump did in an exclusive Reuters interview published Thursday.

The regime of North Korean Supreme Leader Kim Jong Un is a perennial headache for the international community. In recent years, North Korea has shelled South Korean islands and sunk a Naval corvette, claiming dozens of lives, including civilians. To fund its weapons program, the regime produces narcotics, fake currency and uses cybercrime across the globe.

On Feb.13, it even unleashed VX nerve agent — a U.N.-certified Weapon of Mass Destruction — at Kuala Lumpur International Airport to assassinate of Kim Jong Nam, Kim Jong Un’s estranged half-brother. It has abducted possibly hundreds of foreign nationals. At home, its own citizens are subject to “crimes against humanity,” according to a 2014 U.N. report.

However, what’s spurred Trump’s saber-rattling is North Korea’s nuclear program. Pyongyang has tested five nuclear bombs to date, and appears poised for a sixth. It also frequently tests missiles that may one day be able to reach the continental U.S. “[We can] can tip new-type intercontinental ballistic rockets with more powerful nuclear warheads and keep any cesspool of evils in the earth, including the U.S. mainland, within our striking range,” Kim Jong Un said after watching a rocket test last year.

Read More: Why President Trump Could Never Go It Alone on North Korea

Trump says that if North Korea cannot be persuaded from dismantling its nuclear weapons then military action maybe unavoidable. On April 8, he ordered a U.S. navy strike group — an “armada,” he called it — to the Korean peninsula. The obvious problem is that Seoul — home to half of South Korea’s 50 million people, including 200,000 Americans — lies within range of North Korea’s artillery, and possibly even nuclear weapons.

Trump’s gamble is that Kim Jong Un would shy away from retaliating against a U.S. strike on his nuclear facilities, cognizant that American military superiority means any full-scale war would undoubtedly result in his regime’s complete destruction.

“It’s not just about whether North Korea can respond, it’s about escalation dominance,” says Stephan Haggard, professor of Korea-Pacific Studies at the University of California San Diego. “You could find yourself in a situation when the United States thinks those risks are worth taking. We have options.”

Perhaps, but the success of those options hinge on 33-year-old despot who has proved himself ruthless even against members of his own family. Trump told Reuters that he operates under the assumption that Kim Jong Un is “rational.” But backed into a corner, is Trump willing to bet nuclear apocalypse on that?

But even if North Korea were not to retaliate, there’s no guarantee strikes would achieve their goal of permanently retarding the regime’s nuclear program. Plus there would be dire strategic consequences. Beijing would be livid. The U.S. would have started yet another 21st Century war, utterly alienating international public opinion, tearing up its hard-fought Asian security alliance and inviting Chinese hardliners to push it out of the region. According to an August 2016 study by Brown University, the wars in Iraq, Afghanistan and Pakistan — in which the U.S. military has been involved — have directly cost 370,000 lives since 2001. (Not that we’ve stopped counting.)

Read More: Can North Korea Actually Hit the U.S. With a Nuclear Missile?

However, the broader point is that North Korea, for all its many and egregious faults, is a state hell-bent on survival. It might have nuclear weapons, but the regime cannot use them without guaranteeing its own destruction. That’s how nuclear deterrents work. North Korea is not ISIS with an “end of days” deathwish, wreaking jihad across the globe in its quest for a global caliphate.

“Why are people panicking about North Korea?” asks Daniel Pinkston, an East Asia expert at South Korea’s Troy University. “It’s secular, they want to survive and they are very cognizant of power balances. They are not suicidal.”

Unfortunately, there is little chance the regime will voluntarily give up its nuclear weapons. Kim Jong Un is very aware of the fates of Libyan dictator Muammar Gaddafi and Iraqi dictator Saddam Hussein, who were both toppled after abandoning their nuclear aspirations. He believes a nuclear bomb guarantees the security of his regime. And he might be right.

For lack of any better option, the U.S. and its allies should utilize the countless strategic advantages that won the Cold War, because the tussle with North Korea is still part of that ideological reckoning. China should be pressured to crack down on those that profit from doing business with the regime, especially those that facilitate its illegal activities and weapons program. Common ground should be found for talks where possible.

Trump is in a perfect position to do this. He’s a political outsider who says things other politicians dare not. But it’s unsure whether this pragmatism could stretch so far as to openly accept an uncomfortable fact: North Korea already is a nuclear power. Its first nuclear test was over a decade ago, and analysts say it probably has enough material for a dozen bombs today.

From the Soviet Union and China to India and Pakistan, each new member of the nuclear club has faced a frosty reception. There are few good reasons to welcome North Korea, not least the effect it would have on nuclear proliferation, most notable for Iran. But there are absolutely no good reasons to start another Korean War. 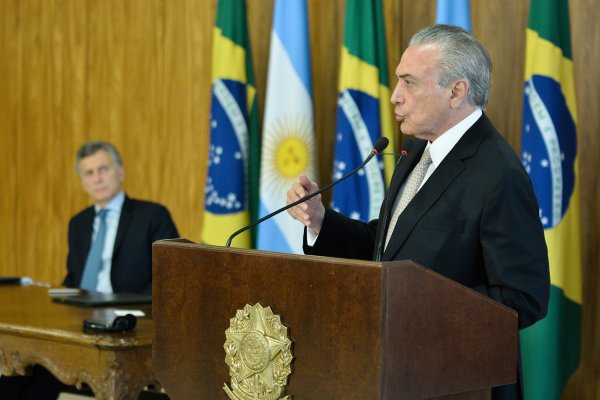 Brazil Is Ready to Turn the Page on an Era of Recession and Graft
Next Up: Editor's Pick