After 100 Days, Donald Trump and the GOP Still Don't Get Along

The marriage of Donald J. Trump and the Republican Party was always in need of counseling.

The billionaire New Yorker was never a natural fit for the GOP, apart from his hatred of Barack Obama. And much of the party recoiled at the populism and anti-Establishment rhetoric that drove hundreds of thousands to Trump’s rallies. The forced attempts at post-campaign reconciliation were hardly convincing; the pairing made little sense outside the lens of mutual benefit and exploitation. It was like watching a reality show where it’s obvious no one much cares for the fellow cast mates.

As Trump’s approaches his 100th day in power, both the President and the party are plenty frustrated with one another. Members of Congress have watched with horror as Trump thrashed about in Washington with little predictability, guided by top aides with little experience in the trenches of government. Staffers with decades of Hill experience find themselves sidelined by political neophytes who think barking orders can get Congress to act. More than once, White House officials have told Paul Ryan that his role as Speaker may be in jeopardy if he does not do more to help Trump.

“It’s Jekyll and Hyde with this guy,” one Ryan adviser says of the President. “But we’re talking about him, so that must mean he’s winning.”

Indeed, even as a government shutdown loomed this week, Trump was still demanding that House Republicans take up the repeal of Obamacare. There are no indications that the GOP has the votes to get it done, and House leadership has tried to steer Trump away from calling for an immediate vote. Trump hasn’t quite come to understand the limits of his power. (Consider: he wants to dissolve the Ninth Circuit Court of Appeals because its judges have delivered Trump legal setbacks.)

As the President flounders, few Republicans on Capitol Hill are rushing to help him. The entire House faces re-election in 2018, and a third of the Senate is in re-election mode. There’s no predicting how Trump’s anemic poll numbers may drag down specific lawmakers, and Democrats are already laying the groundwork to make Trump the face of the Republican Party—even against sober lawmakers such as Sen. Bob Corker of Tennessee or Sen. Jeff Flake of Arizona. Linking arms too closely with Trump could drag them down. No matter how much individual lawmakers may have an affinity for Trump, the first rule of politics is to self-preservation.

“I cannot imagine a scenario where President Trump flying into your state is helpful if you’re in swing state or a tight race,” one Republican strategist says. “And in true red states—think Texas—he has toxic relationships with the Senators. He accused Ted Cruz’s dad of killing Kennedy. How does he help there?”

That leaves the GOP without a popular figure to rally the faithful in an election cycle when the Democratic base is energized. Many of Trump’s voters are new to politics, and there’s no guarantee they will show up to back generic Republicans who lack Trump’s showmanship in a year when he isn’t on the ballot. The Vice President, Mike Pence, can help out, of course, but he lacks the name recognition or pizzazz of his boss. Plus, Pence has been busy working behind the scenes as conservatives’ link to the White House. And no one is clamoring for the return of George W. Bush or Mitt Romney to the campaign circuit.

Which leaves Trump at the head of a party that doesn’t much care for him. Ask rank-and-file Republicans who they see as the party’s leaders, and they often point at Ryan, the affable Wisconsinite who has tried to guide Trump away from his more novel notions. Senate Leader Mitch McConnell has been more pointed in his counsel, often publicly urging the President to close his Twitter app and pick up a policy briefing. Aides to both men are exasperated at Trump’s tactics and have been urging their bosses to take tougher stands against the White House.

“It’s all about the show down there” at the White House, a second Ryan adviser says. “They want the trailer and we’re trying to make the Ken Burns documentary.”

The White House, meanwhile, is doing little to build relationships. Administration officials have invited Hill aides to bowling evenings, and some White House aides have joined Capitol staffers for take-out lunches in conference rooms. But there are few close rapports.

“We can’t make people vote,” White House spokesman Sean Spicer told reporters this week when pushed on the seemingly scant progress. For his part, Trump has threatened members of his own party with retribution if they didn’t give him what he wanted, when he wanted it. “The Freedom Caucus will hurt the entire Republican agenda if they don’t get on the team, & fast. We must fight them, & Dems, in 2018!,” he tweeted in March.

The White House’s frenetic push to deliver on his agenda may be enough to keep Trump’s supporters happy: a Washington Post-ABC News poll released this week found that 84% of voters who backed the President is keeping most of his campaign promises. Trump wasn’t entirely wrong when, during the campaign, he bragged that he could shoot someone in the face and not lose any votes. What he failed to comprehend, then and now, is that the brazen moves aren’t winning him any votes, either—including among fellow Washington Republicans. 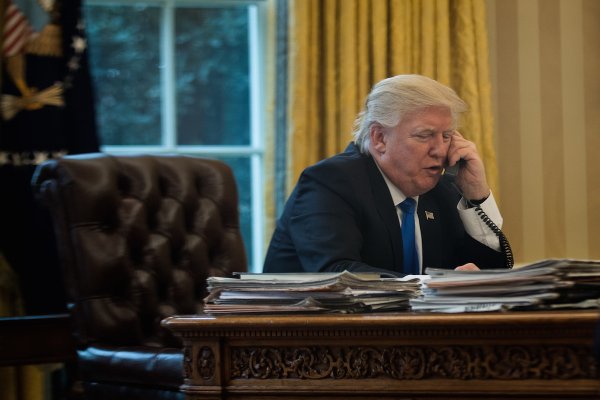 President Trump Presses a Button in the Oval Office to Get a Coke
Next Up: Editor's Pick