(SKOPJE, Macedonia) — Protesters stormed into Macedonia’s parliament and assaulted the leader of the Social Democrats on Thursday after his party and ethnic Albanian allies voted to elect an Albanian as parliament speaker, witnesses said.

Live television footage showed Social Democratic leader Zoran Zaev with blood trickling from one side of his forehead, not long after he announced that the majority coalition led by his party had elected Talat Xhaferi as parliament speaker.

A Reuters witness saw nationalist protesters angered over Xhaferi’s election beating up another lawmaker in parliament. Broken glass littered the floor and traces of blood were seen in hallways.

Some of the roughly 200 protesters inside the parliament were masked. Police entered parliament after the disturbances erupted but did not immediately seek to quell the protesters, witnesses said.

Macedonia has been without a functioning government since 2015 when the country sank into political turmoil over a wiretapping scandal that brought down the ruling nationalist VMRO-DPMNE party bloc.

Elections were held in December 2016 but no government has been formed yet, though Zaev forged a majority coalition in parliament together with ethnic Albanians.

But that parliamentary alliance has triggered daily street protests by Macedonian nationalists in Skopje. Ethnic Albanians comprise a third of the country’s population.

VMRO-DPMNE lawmakers challenged the legality of Thursday’s vote, saying it was not carried out electronically as is the usual case because the parliamentary session had formally ended.

“I condemn the attacks on MPs in Skopje in the strongest terms. Violence has NO place in Parliament. Democracy must run its course,” the EU commissioner in charge of enlargement, Johannes Hahn, said in a tweet.

“This is the time for dialogue and not for violence,” Mats Staffansson, Sweden’s ambassador to Skopje, told reporters on behalf of EU and U.S. legations in Macedonia.

The current crisis is the worst since 2001 when Western diplomacy helped drag the country of 2.1 million people back from the brink of civil war during an ethnic Albanian insurgency, promising it a route to membership of the EU and NATO. But Macedonia has made little progress in that direction.

Shortly before protesters charged into parliament, Zaev told reporters, “With 67 votes we have elected a new parliament speaker. I want to congratulate Talat Xhaferi and good luck to all of us.” 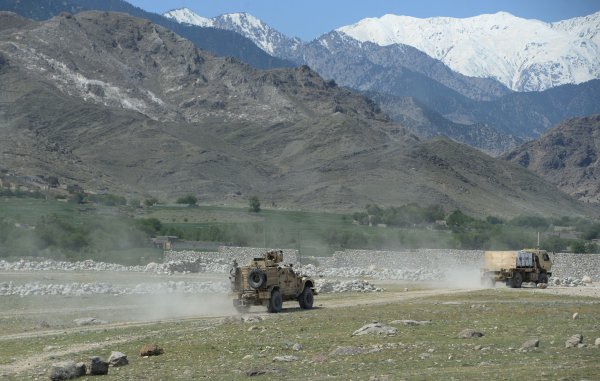 2 U.S. Soldiers Killed While Fighting ISIS
Next Up: Editor's Pick