President Trump Has Been Good News for Coal-Country Families

Tim Phillips is the president of Americans for Prosperity.

Put yourself in these shoes: Your husband comes home from a long day of work. He walks in the door, sets his stuff down and, with sadness on his face, turns to tell your three children what no father ever wants to have to admit: Dad was just laid off — for the third time in six years.

That was Christina’s story in 2014. Her husband had been a coal miner in West Virginia for 20 years and had been able to afford a modest lifestyle for their growing family. But thanks to the “war on coal” — led by President Barack Obama’s Environmental Protection Agency — thousands of lifelong coal-mining families lost their livelihoods in a matter of years.

Christina’s story comes to mind every time I read about federal regulations destroying not just people’s jobs, but families’ livelihoods. And it comes to mind as President Donald Trump finishes his first 100 days. While my organization has disagreed with some of the President’s policies thus far, his team has delivered on a key campaign promise that will help people to improve their lives: removing regulatory barriers that are denying opportunities to working families.

Overregulation has been a problem under both Republican and Democrat presidents, but Obama took it to another level. During his administration, the federal government issued more than 22,700 regulations, costing the economy more than $120 billion each year, according to a Heritage Foundation investigation of Office of Management and Budgeting data. The damage is far worse when considering the human costs of lost jobs and diminished careers.

Unshackling our economy from these regulations requires a thoughtful approach — and that’s what the Trump Administration has deployed thus far. For a change, officials are utilizing Washington’s levers of power to cede more control back to individuals across the country.

This starts with Trump himself. On his first day in office, he signed an executive order halting the implementation of all pending regulations. He also signed an order requiring that for every new federal regulation, at least two others be repealed. And starting in 2018, all federal agencies will be given a regulatory budget they cannot exceed.

The Administration has also enlisted the help of Congress to repeal regulations through the Congressional Review Act. That includes eliminating Obama’s “stream protection rule.” This fulfilled a campaign promise to coal country, as the rule would have eliminated up to 78,000 remaining coal-mining jobs, according to a 2015 report by the National Mining Association. It’s one of 13 Obama-era regulations repealed by Congress so far, with many more expected in the weeks ahead.

Trump’s appointees are doing their part as well. That includes reducing occupational licensing regulations, which require government permission before embarking on certain careers. A 2011 study found occupational licenses can cost nearly 3 million jobs nationwide, covering everything from hair braiders, to landscape workers and countless other professions having nothing to do with public safety. As Acting Federal Trade Commission Chairwoman Maureen Ohlhausen put it in February, “I challenge anyone to explain why the state has a legitimate interest in protecting the public from rogue interior designers carpet-bombing living rooms with ugly throw pillows.” Hopefully under Trump that will soon change.

All in all, the Trump Administration says it and Congress have combined to reduce regulatory costs by over $10 billion over twenty years in just the first 100 days. This is not only welcome news to businesses and consumers in the short-term, but will help to ensure that Washington becomes more efficient, effective and accountable over the long-term as well.

We may not always agree with the Administration’s policy positions. But we will work together where we see opportunities to make progress, such as tax and regulatory reform. As Christina from West Virginia put it, “All we want to do is work.” Working with the Trump Administration, we hope to ensure families across the country have the opportunity to do so. 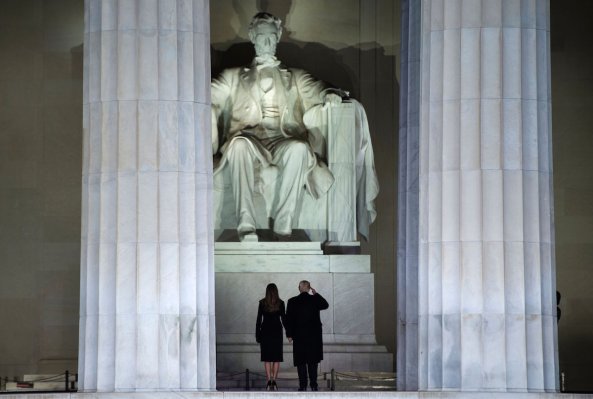 American History According to President Trump
Next Up: Editor's Pick