Anyone who has nodded off on the subway, faked alertness in a meeting at work or skipped a workout because of drowsiness understands the consequences of insufficient sleep. Aside from being unpleasant, however, it can result in weight gain, depression and even decreased brain volume. Scientists are also beginning to understand that our health doesn’t rely only on the quantity of sleep—a non-negotiable seven to eight hours, by the way—but also quality.

So what to do? Some of the proven tips for better sleep are obvious: don’t drink coffee too late in the day; give yourself time to wind down before lights-out; keep stress out of the bedroom as much as possible. But as our world adapts to new trends and technologies, so must our sleep habits. Research is yielding new insights and antidotes to the tossing and turning that make sleep less restorative than we need it to be.

Even when you get a solid eight hours, dozing off for a few more minutes after the alarm can have the opposite of its intended effect. That’s because you may slide into a new sleep cycle, leading to the groggy sensation that researchers call sleep inertia. This impairs things like alertness, memory and reaction time, and it creates the impression that you got a lot less rest than you did. If you snooze because you’re so tired you can’t peel yourself out of bed, something else is probably wrong. Try setting a stricter bedtime and wake time, and be sure to let more natural light into your bedroom in the morning to reset your circadian rhythm.

Speaking of which: a study in the Journal of Clinical Sleep Medicine found that the brains of office workers whose desks were far from windows received fewer light/dark cues—and had out-of-whack circadian rhythms as a result. Compared with their windowed colleagues, they got 46 fewer minutes of sleep per night. Though the study looked at a small group of participants, its logic is in line with what scientists have long known about our sleep patterns.

3. Shut down that tablet

You may find that reading before bed helps you wind down, but opt for a paperback over an iPad. A study in Proceedings of the National Academies of Sciences found “iPad readers had a delayed circadian rhythm, indicated by melatonin levels, of more than an hour.” Further, “participants who read from the iPad were less sleepy before bedtime, but sleepier and less alert the following morning after eight hours of sleep.” Do your best to avoid electronics that emit blue light (yup, your phone counts) right before bed.

Alcohol may make you feel drowsy, but it’s bad for your sleep cycles. Research published in Alcoholism: Clinical & Experimental Research showed that the brain waves of those who drank before bed had more delta activity (associated with deep sleep) but also more alpha activity (associated with resting, but not sleeping, phases). The benefits of falling asleep quickly were counteracted by these disruptive alpha patterns, which means it’s best to set aside the chardonnay earlier in the night.

5. Pay attention to the moon

Strange but true: the moon may impact your sleep. Current Biology reported that study participants who slept in a completely dark lab got an average of 20 fewer minutes of sleep per night on the days shortly before or after a full moon and also showed lower levels of melatonin (the hormone that makes you sleepy) and 30% less EEG activity, which is associated with deep sleep. This monthly anomaly seems to be ingrained in our circadian rhythm, and even though you can’t do much about it, you might try going to bed extra early the day before a big meeting if it takes place close to the time of a full moon.

Unfortunately, many workers with overnight schedules have no choice but to be on duty when others are sleeping, but the science is clear: the night shift is bad for your health. A study in the American Journal of Preventive Medicine followed nearly 75,000 nurses and found that those who worked rotating night shifts had an 11% higher risk of early death than those who did not. If they worked that schedule for more than 15 years, their risk of dying from heart disease was 38% higher than their peers’. They also had heightened risks for several types of cancer. So far, researchers don’t know how to counteract the havoc wreaked by uncommon sleep cycles, but they recommend that workers who can’t avoid these schedules pursue healthy living with diligence in other areas, like diet and exercise.

To catch more z’s, you may need to spend more time on the treadmill. A study in the Journal of Clinical Sleep Medicine found that older adults who suffered from insomnia were able to sleep 45 to 60 minutes longer per night by exercising for 30 minutes three or four afternoons a week. The catch: on individual days, a workout was not likely to make falling asleep easier. It took regular exercise over an extended period of time (about four months) to significantly and consistently give them longer nights of sleep.

Historians now know that our ancestors slept very differently from us. While most adults today go to bed and stay in bed, in the past people slept for a period, woke up for an hour or so, and then went back to sleep. Virginia Tech professor A. Roger Ekirch reported that this “segmented sleep” made for all kinds of nocturnal break activities, from reading to praying to having sex. There’s no reason to force yourself to switch from consolidated sleep to segmented sleep, but if you find that you wake in the night, don’t stress yourself out trying to doze off again—you’re following in the path of your forebears.

According to the American Academy of Dental Sleep Medicine, 18 million Americans have sleep apnea, a disorder in which the airway becomes blocked, causing sufferers to snore loudly and stop breathing for short periods. This not only results in drowsiness from poor sleep quality but can raise blood pressure to a dangerously high level. The standard treatment, a special mask worn during sleep that facilitates continuous positive airway pressure (CPAP), helps the user sleep better and, research shows, reduces inflammation—thus helping prevent the long-term side effects of the disorder. 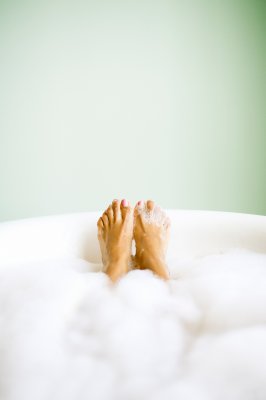 5 Things Experts Do for Better Sleep
Next Up: Editor's Pick