Joan Stallard, right, talks about the issue of the Supreme Court striking down the limit one can donate to political campaigns in front of the U.S. Supreme Court in Washington, April 2, 2014.
Rod Lamkey—Getty Images
By Michael Scherer

For years, the best ticket in U.S. politics cost about $36,000, give or take a few grand. For that amount, you could sit down for dinner with the President of the United States, usually in some VIP’s ridiculously large house hung with modern art. A similar check could allow you to break bread with the Speaker of the House, the Senate majority leader or one of President Obama’s general-election rivals. You might also get commemorative photos, private policy briefings, meetings with aides and a handwritten note of thanks on fancy stationery for your office wall. Most important, your views would be heard.

The cost of this top-flight access, however, was never determined by the free market. Campaign-finance laws dating back to the 1970s limited how much money an individual could give to candidates or political parties in a single election cycle, thereby restricting how much a politician could request. Congress put the rules in place to keep wealthy interests from buying official favors by funding entire political machines — and from creating the appearance that the political process was corrupt.

Now all that is about to change. In a landmark ruling on April 2, a sharply divided U.S. Supreme Court decided that limits on aggregate donations violated the constitutional right to free speech. The 5-4 decision in the case, brought by Alabama businessman Shaun McCutcheon and the Republican National Committee, will likely transform the business of politics yet again, pushing even more money into elections. But the ruling’s biggest impact may be on the national view of the conditions that make politics corrupt.

For decades, courts took a rather broad view of the public interest, wary of anything that looked like pay-to-play politics. For Chief Justice John Roberts, however, the legal scope is far narrower, limited to cases of quid pro quo deals directly between a donor and a politician. “The government,” he concluded in his majority opinion, “may not seek to limit the appearance of mere influence or access.” Instead, Roberts writes that “general influence” over politicians by big donors, far from being improper, is protected speech.

This same logic drove the court’s 2010 Citizens United ruling, which created a new generation of so-called super PACs — outside groups that spend unlimited amounts of money to influence elections, usually by flooding television screens with negative ads. In that decision, the court found no risk of corruption from the corporations, unions, millionaires and billionaires that bankroll a candidate’s election through a third-party group, even if the candidate attends the group’s fundraisers and allows loyal aides to run it and the group explicitly makes decisions based on the candidate’s public statements.

In the same vein, the ruling in McCutcheon v. Federal Election Commission finds that if a politician or party leader raises millions from a single donor for multiple campaign entities, there is no risk of corruption, since the money is not going directly into the politician’s own campaign account, which is still subject to donation limits. For the four dissenting liberal Justices, this notion makes no sense. “It creates a loophole that will allow a single individual to contribute millions of dollars to a political party or to a candidate’s campaign,” Justice Stephen Breyer wrote in his dissent. “Today’s decision eviscerates our nation’s campaign-finance laws, leaving a remnant incapable of dealing with the grave problems of democratic legitimacy that those laws were intended to resolve.”

In practice, the new rules could give moneyed interests a bigger say in politics, and those writing the checks can expect to pay higher prices for access to leading politicians. Now there is nothing to stop Obama from asking donors to give $500,000 or even $1 million to attend a sit-down dinner, so long as the money is distributed among dozens of Democratic Party committees and candidates. The question for historians will be whether this new freedom leads to an increase in the sort of quid pro quo dealmaking between donors and politicians that Roberts says Congress still has a right to discourage.

In the meantime, millionaires and billionaires beware: the dues for America’s elite political-donor clubs are about to rise. Get your pocketbooks ready. 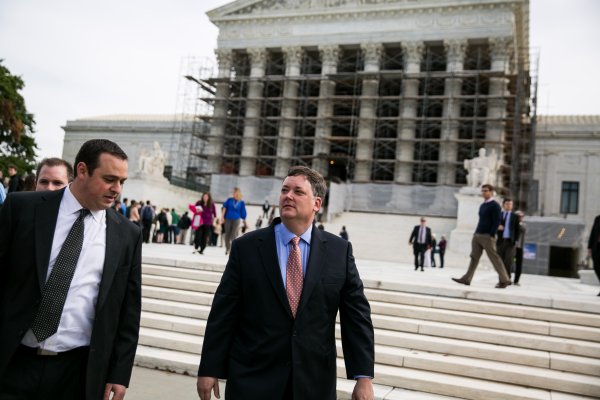 The Alabama Engineer Who Made History At the Supreme Court
Next Up: Editor's Pick