Serena Williams found out she was expecting her first child just two days before the Australian Open.

In a TED Talk interview with Gayle King this week, the tennis great revealed she was “nervous” about playing while pregnant but managed to buckle down and focus on the task at hand. “It wasn’t very easy,” she said. “You hear all these stories about people when they’re pregnant — they get sick, they get really tired, really stressed out… I had to really take all that energy and put it in a paper bag, so to say, and throw it away.”

“Pregnant or not, no one knew, and I was supposed to win that tournament as I am every tournament that I show up [for],” she added. “If I don’t win, it’s actually much bigger news.”

Williams did win that tournament in January — her seventh Australian Open title. And when she announced her pregnancy to the world last week, social media users pointed to that victory as further proof of her status as the “greatest of all time.” Others questioned how a pregnant woman could accomplish such a feat.

Just last year, runner Sarah Brown made headlines after announcing that she planned to attempt to make the U.S. Olympic team less than four months after giving birth to her first daughter. She trained throughout her pregnancy and then returned just one week after giving birth. “The pregnancy was unexpected, and I had some goals that I wanted to achieve before finding out,” Brown told Motto. “There was no reason why I shouldn’t keep trying.”

But her decision to keep on training, which she made in consultation with doctors and her husband, was met with some criticism. “There were people reaching out with support,” Brown, who ultimately didn’t make the 2016 roster, said. “And there were people also calling me crazy and saying what I was doing was unhealthy.”

In 2015, the International Olympic Committee gathered sixteen experts from around the world to explore research and recommendations for athletes during pregnancy and after childbirth. Their subsequent report, released in 2016, found that it’s completely safe for women to keep training as they were before — so long as they adapt to the needs of their own body as it changes.

“This is individual and depends on sports,” Kari Bø, a professor at the Norwegian School of Sport Sciences and one of the report’s authors, told Motto. “For example, a rhythmic gymnast would probably not be able to continue with back bending after their first trimester, while someone who participates in orienteering would be able to walk or jog in the forest until birth.”

Earlier this month, seven-time Olympic medalist Dana Vollmer swam the 50-meter freestyle at a national meet while six months pregnant with her second child. “I knew I definitely wasn’t going to go as fast as I was going into Rio, but that wasn’t the goal,” Vollmer told Motto. “Nobody cared what time I got or what place I went. I was having fun just competing.”

“I need goals. I’ve always known that about myself and that doesn’t change just because I’m pregnant,” she said. “So, setting the goal of wanting to compete at the Mesa meet was motivation for me to keep working out while pregnant.”

The swimmer says that she was overjoyed with the response she got following the race. “I had so many people writing me on social media talking about marathons they did or continuing to swim or doing different races,” she said. “It’s amazing how strong pregnant women are and what we’re able to do.”

Though elite athletes — like many other career women — are able to balance pregnancy and subsequent motherhood with their careers just fine, older athletes say that hasn’t always been the norm. Hall of fame tennis player Gigi Fernández, who won 17 Grand Slam doubles titles, has publicly spoken out about her struggles with infertility after delaying motherhood to focus on her career. “As athletes, you’re so focused on performance and you train very intensely. I would skip periods,” Fernández told Motto. “It was a very difficult time in my life.”

Fernández, who retired from her sport in 1997 and now coaches, eventually did become pregnant with the help of IVF and now encourages younger female athletes to freeze their eggs. “I think that there’s a time and a place for everything,” she said. “Our athletic careers aren’t forever — you have to do it while you’re young. But at some point, if you want to be a mother, you have to take a break and focus on that.”

In 1997, basketball star Sheryl Swoopes announced that she was pregnant before the inaugural season of the WNBA, which she was widely expected to be the star of. Swoopes returned to her sport six weeks later, which — while probably not a surprise to most women — was unusual for female athletes at the time. “I don’t know if anyone thought that was possible until [Sheryl] did it,” WNBA player Tina Thompson said in a documentary about Swoopes.

But as evidenced by Williams, Brown, Vollmer and others, competing and training while pregnant is totally doable. “Pregnancy isn’t a disability,” Bill Moreau, the managing director of sports medicine for the U.S. Olympic Committee, told NBC in 2012. Still, we have a ways to go before a pregnant athlete excelling at her job will be commonplace rather than cause for excitement, questions or scrutiny.

After all, Vollmer and Brown, who both have their sights set on making the 2020 Olympic team in their sports, are just pursuing their careers. 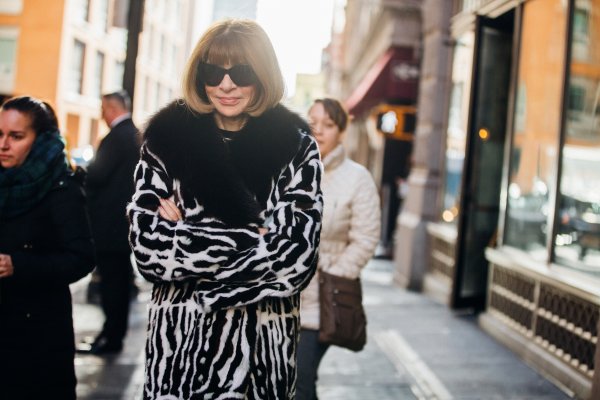 Anna Wintour Dresses Down Critics Who Think Fashion Is Frivolous
Next Up: Editor's Pick