Liberal activists have flooded their elected representatives with letters, calls, and town hall protests to encourage lawmakers to resist President Trump. Now, two activist groups are hoping to turn the wave of anti-Trump outrage against nine corporations they say are enabling Trump’s agenda.

The progressive alliance Center for Popular Democracy and immigrant rights group Make the Road New York have partnered to create a new platform to “name and shame” companies they say are working with Trump or profiting from what they describe as his “anti-immigrant, anti-worker” agenda.

Corporate Backers of Hate, which launched Thursday, will allow users to send messages directly to the CEOs and board members of the nine companies in question, including JPMorgan Chase, Wells Fargo, Goldman Sachs and BlackRock (you can see the full list here.) The idea is for activists to pressure the individuals making the decisions at these companies in the same way they would pressure the individuals making decisions in Congress.

“We are convinced they have the capacity to move the Trump Administration,” said Ana Maria Archilla, co-executive director of the Center for Popular Democracy. “And to the extent that they are quietly placating the behavior of this White House, they are just as complicit as Ivanka Trump.”

The groups argue the nine companies are helping Trump on a sprawling range of issues, from participating in the president’s Strategic and Policy Forum to opposing worker protections to helping finance the Dakota Access Pipeline. But many of the banks and investment firms on the list are targeted specifically for their financial ties to private prison and immigrant detention companies like Geo Group and CoreCivic. They say financial institutions like JPMorgan Chase, Wells Fargo, BlackRock and Goldman Sachs stand to profit from Trump’s tighter enforcement of immigration laws.

“There are a lot of people who are going to be profiting from the level of hurt that our communities are going through,” says Javier Valdes, co-executive director of Make the Road New York. “They should change their business practices in a way that is not entangled with the immigration enforcement agenda of this Administration.”

The financial institutions have downplayed the importance of their financial ties to private prison companies. JPMorgan pointed to CEO Jamie Dimon’s April 4 shareholder letter expressing support for more open immigration policies. A Wells Fargo spokesperson said that shares of private prison and immigration detention companies are held in Wells Fargo asset management funds, which are owned by the customers, not the bank itself. A spokesperson for BlackRock said that the relevant investments are passive, determined by third-party providers, and that they do allow clients to customize portfolios to reflect their values. Goldman Sachs declined to comment.

This type of mass lobbying of individuals in the private sector is largely unprecedented, and several corporate responsibility experts said they had never heard of activists using this particular tactic. But since Trump’s inauguration, liberal activists have been targeting both political individuals and major corporations with increasing intensity. Thanks to coordinated efforts by groups like Indivisible, concerned citizens are snarling Capitol Hill phone lines, confronting congressional aides and flooding town halls to put pressure on their individual representatives to thwart Trump’s plans for immigration and health care.

Corporations have already begun to feel the heat of the liberal rage: the #grabyourwallet campaign helped pressure Nordstrom to drop Ivanka Trump’s brand, Uber’s response to the travel ban protests at JFK caused thousands to delete the app and dozens of corporate advertisers pulled their ads from Bill O’Reilly’s show on Fox News after liberal outrage at the host’s pattern of sexual harassment. Targeting individuals who run corporations may be the logical convergence of these twin strategies.

To create the platform, 20 volunteers researched the individual email addresses of each CEO and board member of the nine companies, which will allow angry citizens to directly contact the individuals who run these companies and bypass the corporate feedback channels. The activists did not publish the email addresses online, but instead allow users to send messages through their online platform.

“Whether we like it or not, everything is political now, including business,” says Aaron Chatterji, associate professor at the Fuqua School of Business at Duke University. “We can leverage the way people interact with campaigns to the way they interact with companies.”

Strict neutrality once seemed the safest path for corporations anxious to avoid alienating customers on either side of the political spectrum. But the corporate PR landscape is quickly changing, and over the last two years many corporate executives have made political stances based on issues that may not necessarily affect their bottom line. Even before the 2016 election, companies waded into political debates over LGBT discrimination in Indiana and transgender bathroom laws in North Carolina.

Still, other experts are skeptical that a flood of angry mail will do much to change the business practices of major corporations. “I can’t believe that letter writing will matter unless they think it’ll affect their bottom line,” says Susan McPherson, founder of communication consultancy McPherson Strategies. “If it’s 30,000 people who are going to pull their million-dollar bank accounts with Wells Fargo, that could work. If it’s housebook savings, maybe not.”

This much is clear: in an increasingly polarized political landscape, corporate activism is more fraught than ever. “Before, executives would say ‘why would I take a position that would alienate 50% of the population?” says Chatterji. “Now, silence is conspicuous.” 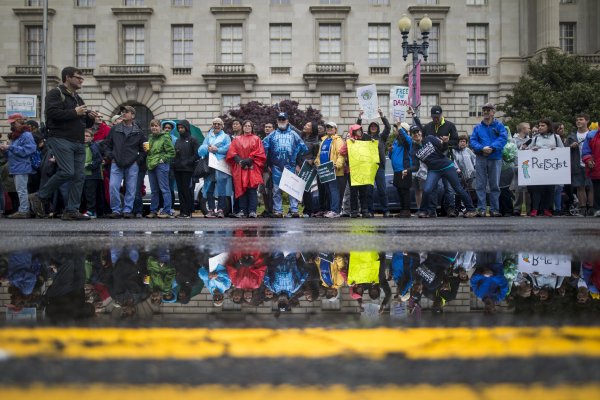 Thousands Protest at the March for Science
Next Up: Editor's Pick