Presidents Haven't Always Had to Worry About Their First 100 Days. Here's How That Started

Donald Trump arrives on the West Front of the U.S. Capitol on January 20, 2017 in Washington, D.C., for his Inauguration.
Win McNamee—Getty Images
By Elizabeth King

As President Donald Trump nears his 100th day in office — it falls this Saturday — pundits and voters alike are closely scrutinizing the early days of his term. Generations of presidents have faced the same treatment before him, but why?

The concept of grading the president’s first 100 days was born of the Great Depression, when Franklin Delano Roosevelt knew just what he’d have to do to win the White House.

Running for the White House in 1932, as the U.S. economy suffered, FDR was aware that voters were desperate for fast action from their future president. That was especially so because President Herbert Hoover, a Republican, was strongly criticized by Democrats of the day for not doing enough to help the 25% of Americans who were left jobless by the Depression. Knowing that the promise of expedient moves to ameliorate job loss, hunger and depleted national morale would set him apart, FDR became the first president to make big promises about immediate action, and then followed through in a serious way.

In fact, Roosevelt even laid out his plan for the New Deal during a September 1932 campaign speech to the Commonwealth Club in San Francisco. During this speech, FDR called for “a re-appraisal of values” in light of the Great Depression, and spoke at length about how the government should enable citizens to be economically prosperous, or at least solvent.

And it worked. Roosevelt not only beat Hoover in the election of 1932, but also went on to win an unprecedented three additional elections after.

But Barbara Perry, Director of Presidential Studies at the University of Virginia’s Miller Center tells TIME that when Roosevelt spoke of his “first 100 days,” he was referencing not his own first 100 days in office but rather the first 100 days of the new Congress that served during his first term. Sure enough, during that time FDR oversaw the passage of several pieces of new and significant legislation, including laws to create the Civilian Conservation Corps and the Federal Emergency Relief Administration. Though the legacy of these New Deal creations would endure for longer than those Depression-specific programs did, the 100-days metric still abides as well.

Before the concept of the 100-day metric caught on fully with the media, voters, and later presidential candidates, Roosevelt gave his administration a self-appraisal in honor of the 100-day mark during one of his fireside chats in July of 1933. After that, the first 100 days became a phenomenon.

One reason for its lasting impact is the media obsession with covering a President’s first 100 days with extra attention and scrutiny began as soon as FDR introduced the idea. Perry points out that it was not until after FDR’s election that political polling was introduced to measure a President’s performance, so the 1930s saw is the emergence of the attempt to quantify a president’s successes and failures, as well as his public perception. That innovation made the 100-days narrative a natural fit.

Since Roosevelt, presidential candidates have solidified a tradition of campaigning with promises about their hypothetical first 100 days in office, and the media and public have followed suit in keeping scrupulous tabs on these first months of a new president’s White House occupancy.

The idea still lingered even when Presidents sought to downplay it. During his inaugural address in 1961, John F. Kennedy outlined some of his plans for his term, telling the crowd: “All this will not be finished in the first one hundred days. Nor will it be finished in the first one thousand days, nor in the life of this Administration, nor even perhaps in our lifetime on this planet. But let us begin.”

Contemporary presidential candidates have frequently laid out “100-day plans” in order to woo the public as FDR did. In his 100-day plan, which he called a “Contract With the American Voter,” Trump promised, among other things: “a hiring freeze on all federal employees, … direct the Secretary of the Treasury to label China a currency manipulator, …[and] cancel billions in payments to U.N. climate change programs.”

Overall, Perry believes that the first 100 days is not necessarily the most important time period in a president’s career. There’s a real learning curve to the White House that takes more than 100 days to catch up with, even for presidents who have prior experience in politics, which President Trump did not.. Many Presidents have agreed with Perry, downplaying the importance of the first 100 days.

From the perspective of presidential history, Perry says that because the 100-day mark was born of a specific financial crisis, there’s no real need to pay more attention to the first 100 days than we do the first five or the first 1,000. “It can be helpful to monitor in terms of ongoing crises, but why should it be more meaningful than how presidents responds to major events that fall outside of the first 100 days?” she asks.

The short and arbitrary 100-day measurement may, however, provide some insight into how a president will run their administration. Citing Bill Clinton as an example, Perry describes how his first term began chaotically, presaging an administration that was politically chaotic even amid its successes.

The first 100 days is a time period we mark not because it’s inherently important, but because it’s just what we’ve been doing since 1933. 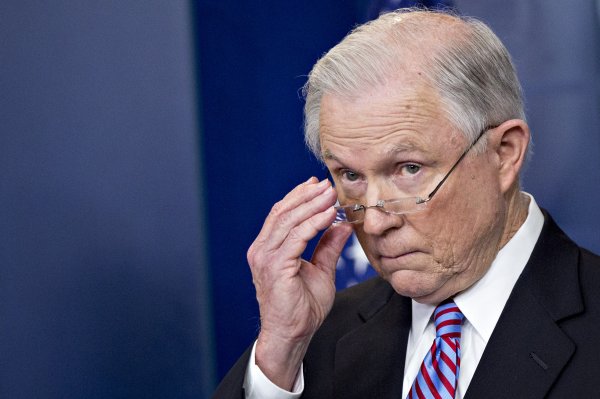 Jeff Sessions' Hawaii Comment Was a Throwback to American Imperialism
Next Up: Editor's Pick