The ship, which has not yet been named, ceremonially entered the water with much fanfare at 9 a.m. local time, reports the state-run Xinhua news agency. It joins the ranks of the Liaoning, an extensively retrofitted former Soviet ship that became China’s first aircraft carrier in 2012.

Citing local media, the Associated Press reports that the new carrier will have capacity for 24 J-15 fighter jets and 12 helicopters, while the BBC reports that the ship will run on conventional power rather than nuclear.

The launch comes as the U.S. is sending an aircraft carrier strike group of its own — which North Korea has threatened to sink — and other vessels to waters near the Korean Peninsula, amid rising tensions in the region over Pyongyang’s nuclear missile program.

The latest addition to Beijing’s naval fleet comes against the backdrop of long-running territorial disputes in the South China Sea, where six nations have overlapping claims to various islets and reefs throughout the key waterway. China asserts sovereignty over most of the Sea, and has transformed several reefs into artificial islands, capable of accommodating military equipment and planes. 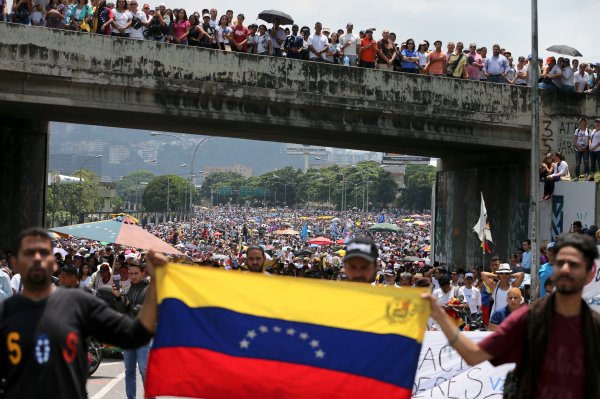 Death Toll in Venezuela Protests Rises to 26
Next Up: Editor's Pick