Why the Unicorn Frappuccino Is the Drink America Deserves

Starbucks
Ideas
By Nate Hopper
Hopper is a former Ideas Editor for TIME.

Whenever I’m feeling down about the world, I drink poison. Not quick-acting poison. The stuff with a greater half-life: The kind of sugary delights that boil down into sludge but in the moment get my heart thrumming. It’s a short-term fix that also may decrease my life’s longer term, so overall I will need fewer short-term fixes — you know, a win-win.

It seems like America thinks I have the right idea. For the past week, the country has gorged itself on half-a-meal’s worth of calories in a sugary drink: Starbucks’ Unicorn Frappuccino. On April 19, the company debuted the pink-and-blue-turned-purple item for a five-day release, announcing “the elusive unicorn from medieval legend has been making a comeback” — now with a green-straw horn. It has since become a sensation within a larger sensation, including more unicorn recipes, as well as unicorn hairstyles, unicorn lemonade and maybe unicorn Hidden Valley ranch dressing.

But why? Asking such a question reveals an oddly modern-America blend. Forthwith, the ingredients:

The 27-year-old food-stylist Adeline Waugh has been largely credited with starting the craze when she added natural ingredients (beetroot, chlorophyll) to tint her health-food portraiture. The dyes were mostly aesthetic, for cream cheese on toast — the resulting hues looked more appealing on Instagram. As Waugh recently told the New York Times, “The entire point of what I was trying to do when I first created unicorn toast was to show people that healthy food can be fun and exciting—especially to give to your kids.” Soon, though, the technique spread to cakes and hot chocolate covered in Lucky Charms.

Waugh had another impulse, too: “Sometimes with everything going on in the world, people just want to play with their food, or look at a picture of food that is brightly colored and happy and fun,” she said in the Times interview. There has undeniably been much to want to look away from recently, no matter your perspective. For example, the Unicorn Frappuccino debuted during a disapproval trough for President Donald Trump — which has since rebounded to normally high levels of dissatisfaction. Leading up to and beyond April 19, Americans wondered if war with North Korea became inevitable, watched one of its most powerful (and for a time, trusted) television anchors get fired amidst sexual-harassment allegations and also heard whispers that they might need to slog through another health-care debate — this time without the provision many like. This was the world in which the medieval legend made its comeback, and it proudly marched into our feeds to give us joy and rare power again.

Starbucks was drizzled in both trends. The company picked up on the social media buzz. (It was well timed to become a springtime Frappuccino blended beverage, akin to last year’s Birthday Cake Frappuccino. Strangely, despite its siren icon, it did not select the sister trend: mermaid food.) But it also perhaps had broader concerns. While it’s unlikely the unicorn was a direct reaction, for several months Starbucks had become mired in politicking, and over the past year, its stock has remained relatively stagnant — at least in part because of its responses to the President’s actions. After Trump announced a January travel ban, then-CEO Howard Schultz announced a plan “to hire 10,000 [refugees] over five years in the 75 countries around the world where Starbucks does business.” It would begin in the United States and focus on “those individuals who have served with U.S. troops as interpreters and support personnel in the various countries where our military has asked for such support.” Protestors threatened boycotts. Customer support dropped. Investors rebelled. One, the National Center for Public Policy Research, a free-market think tank that is also a shareholder, decried the company’s actions in March as anti-conservative: “Coffee has no political allegiance,” its general counsel wrote. (The organization told TIME it was unavailable to comment on the politics of unicorns.) Yet in swooped the unicorn, and Starbucks’ stock once again trended up towards the Lisa Frank–styled stars.

Unicorns have traveled a long way to become drinks. They first galloped into Western lore, according to University of Nottingham geographer Chris Lavers in his 2010 book The Natural History of Unicorns, by way of India around 398 BC, when the Greek historian Ctesius described “certain wild asses which are as large as horses, and larger.” They were white and red, with dark-blue eyes. They had a sharp horn tipped with “a vivid crimson.” They could only be captured with the use of “many men and horses.” It is not impossible that Ctesius had seen an animal similar to a rhinoceros. Through a series of mistranslations, the tale of the unicorn later became entwined with that of the Bible (where the word “unicorn” now appears several times) and particularly in medieval times took its more common shape: A goat with a horn that came to be a horse with a horn. But it soon became much more. It would symbolize Christ — and chastity for young women. A few texts detail how girls alone could tame the beasts (not “many men”). The seventh-century scholar Isidore of Seville wrote: “The unicorn is too strong to be caught by hunters, except by a trick: If a virgin girl is placed in front of a unicorn and she bares her breast to it” — though some translations use “lap” instead of “breast” — “all of its fierceness will cease and it will lay its head on her bosom, and thus quieted is easily caught.” (Some pagan traditions had a more carnal reading of the animal and its pronounced appendage, and today, at least one hedonist, polyamorous movement has been led by someone who identifies as a unicorn.) Whatever the unicorns once meant, though, they still represent vibrancy and purity (two themes that appear in Waugh’s Instagram handle and blog title). They also could very well offer empowerment to young girls: Beautiful, magical creatures imbued with abilities boys perhaps can’t possess.

That is a lot happening in one drink. All together, the Unicorn Frappuccino, fittingly, seems both sweet and a little sour.

A social-media entrepreneur begins a trend with the intent of getting kids to eat healthy; the idea gets doused in sugar. A corporation being criticized for its progressive politics joins the movement apolitically; a sad America guzzles more sugar into a warless bliss. The item becomes a status token (complete with the user’s own custom blend of excitement or irony), while also infantilizing the people who possess them. And all the while, everything is tied up in a European mistranslation (of what might now turn out to be a grey, wart-covered herbivore) that then became a symbol of chastity that now seeks to empower young women, who probably shouldn’t get addicted to caffeine quite yet.

It all admittedly makes my head spin. I feel a little down. But then I hear the good news: Legend has it, unicorn horns cure poison. 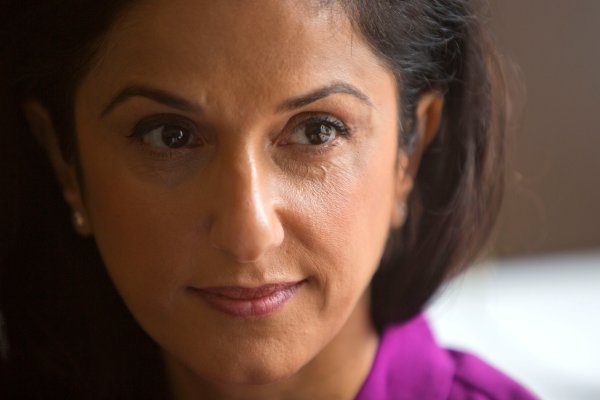 The Day Israel Banned My Book From Schools
Next Up: Editor's Pick