President Trump Threatened to Withhold Money From Sanctuary Cities. They May Not Lose That Much

President Trump has called for certain federal grants to be withheld from cities that do not report undocumented immigrants to federal authorities, known as “sanctuary cities.”

But the standoff may cost the cities less money than originally thought.

On Friday, the Department of Justice sent letters to nine jurisdictions citing specific types of grants that may be cut, many of which are directly related to law enforcement.

Each of the nine letters, which went to the state of California and major cities like New York and Chicago, cited a specific grant that compels them to work with federal authorities on immigration violations. “Failure to comply with this condition could result in the withholding of grant funds” or “suspension or termination of the grant,” the letter warned.

But a TIME examination of the eight grants cited in the letters — one of which is repeated in letters to the city of Chicago and the surrounding Cook County — found that many do not come with large price tags by government standards.

Each grant lists, in general terms, how the locality will use the money. Chicago, for example, stated in 2016 that it would use the funds “to purchase equipment and support overtime patrols. The project goal is to increase essential law enforcement services.”

The Chicago grant is one of 1,010 outlays known as “Byrne JAG” grants that were issued to localities in fiscal year 2016. Another 56 were issued to states, for a total of $264 million. But threats to withhold these grants, which date back to the Obama Administration, appear to contradict Trump’s executive order to spare grants which are “necessary for law enforcement purposes.”

At the same time, many legal scholars argue that it is unconstitutional to dangle any other type of federal grant as a condition for compliance with a matter of law enforcement, in large part thanks to Chief Justice John Roberts’ opinion on the Affordable Care Act case. As constitutional law scholar Noah Feldman noted, Roberts concluded that “Congress can’t create a funding condition that is unrelated to the original funding purpose.” In other words, it might be difficult for the Justice Department to make receiving education grants dependent on whether a city reports undocumented immigrants to federal authorities.

Instead, some experts surmise, what could be at stake are other grants issued by the Justice Department that are less explicitly related to law enforcement. For example, there are 25 programs issued by the department’s Office on Violence Against Women and others devoted to juvenile justice and delinquency prevention. While no official in the Trump administration has specifically cited these programs, last week’s letters state that failure to comply with federal immigration law could make states and localities ineligible for all grants from the Office of Justice Programs, which oversees both law enforcement grants and those like the ones mentioned above.

Should sanctuary cities choose not to comply, many predict a protracted legal battle before a single dollar is withheld from a grant, many of which are determined by formulas and aren’t otherwise subject to discretion. In the interim, it remains unclear exactly which programs the Trump Administration is willing to attempt to deny cities that do not cooperate. 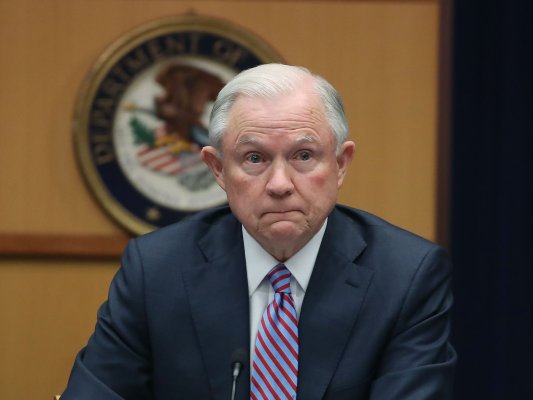