The last time a state tried to execute two death row inmates in one day, the first execution was botched and the second one was rescheduled, leading to a prolonged legal fight that reached the U.S. Supreme Court. On Monday night in Arkansas, officials are hoping for a different outcome.

Almost three years after Oklahoma abandoned its second execution following complications from the first, Arkansas is planning to execute Jack Jones and Marcel Williams within hours of each other. No state has carried out a double execution since 2000.

The scheduled lethal injections mark the latest turn in Arkansas’ controversial attempt to thin its death row in quick succession. Because of an expiring supply of a key lethal injection drug, the state had scheduled the executions of eight inmates within 11 days of each other. But a series of legal challenges have upended the plan. The Arkansas Supreme Court has stayed three of those executions while a federal district court granted another inmate a preliminary injunction.

The only execution the state has carried out so far is that of Ledell Lee, who was convicted of murdering Debra Reese more than two decades ago, on Thursday. He was the first prisoner executed in Arkansas since 2005.

Why Jones and Williams are on death row

Jones, 52, was convicted in the 1995 rape and murder of Mary Phillips, who had been strangled with a cord from a coffee pot and found naked from the waist down. Williams, 46, was sentenced to death for the 1994 rape and murder of Stacy Errickson, who he had kidnapped from a gas station. Her body was found in a park two weeks later.

Read more: Arkansas Prepares for First Double Execution in the U.S. Since 2000

Jones and Williams have been arguing for a stay of execution over what their attorneys say are health concerns. Jones’ lawyers say that drugs the inmate uses for ailments like neuropathy could prevent midazolam, a sedative meant to put inmates to sleep, from properly working and could lead to what they describe as a “torturous death.” Attorneys for Williams say he weighs more than 400 pounds, which they say could make it difficult for executioners to find a vein for the lethal injection and potentially lead to complications. Federal judges have so far denied the inmates’ requests. On Monday, the Arkansas Supreme Court also rejected issuing stays.

The state has been buffeted by a series of challenges to its execution schedule, which was set last month by Gov. Asa Hutchinson, a Republican, because the state’s supply of midazolam expires by the end of April. A number of legal motions have challenged the state’s compressed execution schedule, the constitutionality of its lethal injection protocol, and the methods that state has used to obtain the drugs.

If Arkansas carries out the lethal injections Monday night, it will be the first time a state has executed two inmates in a single day since Texas in 2000. The last time a state attempted to do so was in 2014, when Oklahoma tried to execute Clayton Lockett and Charles Warner within a few hours of each other. Lockett’s execution, however, quickly ran into complications when executioners tried and failed to find a vein to inject Lockett, leading to the execution drugs entering Lockett’s flesh and muscle rather than directly into his bloodstream. The execution took almost 45 minutes, in which Lockett groaned on the gurney and appeared to try to speak. An investigation later found that Lockett died of a heart attack.

Read more: Why Arkansas is Executing 7 People in 11 Days

Warner’s execution scheduled for that evening was called off. He was eventually put to death in early 2015. Since the Lockett execution, the state re-examined the way it carried out capital punishment. The Oklahoma Department of Public Safety has recommended that the state schedule only one execution a week, citing additional stress placed on executioners that may have led to problems in Lockett’s lethal injection. 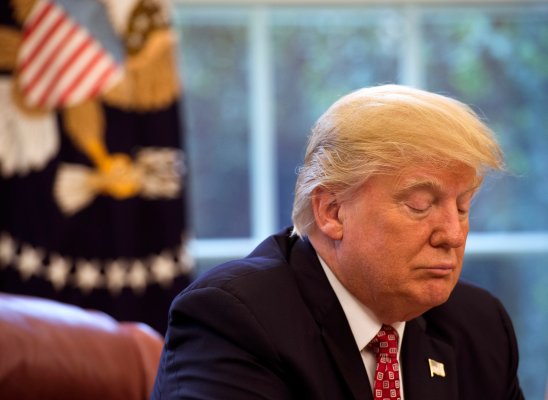 'Never Again.' President Trump Acknowledged the 6 Million Jews Killed in the Holocaust
Next Up: Editor's Pick