Jeff Sessions' Hawaii Comment Was a Throwback to American Imperialism

Jeff Sessions, attorney general, removes his glasses during a White House briefing in Washington on March 27, 2017. Some 200 jurisdictions have refused to honor federal requests to evict undocumented immigrants and the nation is less safe when jurisdictions fail to carry out deportations, Sessions said.
Andrew Harrer—Bloomberg/Getty Images
Ideas
By Doug Mack

Doug Mack is the author of The Not-Quite States of America: Dispatches from the Territories and Other Far-Flung Outposts of the USA.

Sometimes, it’s hard to tell what year the Trump Administration thinks it is. Last week, Attorney General Jeff Sessions expressed amazement that “a judge sitting on an island in the Pacific” could block President Donald Trump’s latest travel ban. It seemed he was stuck somewhere pre-1959, before that far-off land, which most of us just call Hawaii, became a state.

Sessions later claimed that he was just stating a geographic fact: Hawaii is, indeed, located in the Pacific Ocean. But he cannot deny the subtext. By overtly portraying our fiftieth state as a distant region rather than part of his own homeland, Sessions said: This place is foreign, not really part of us. He channeled a complicated chapter in American history — one that the President has explicitly praised and that still pains other islands in the Pacific.

In March 2016, the New York Times asked then-candidate Trump to pinpoint when, exactly, he thought America had been “great.” His answer: Around 1900, which he called “a pretty wild time for this country and pretty wild in terms of building that machine, that machine was really based on entrepreneurship etc., etc.”

That sentence seems to be about money. Indeed, having passed Great Britain as the world’s largest industrial economy in 1890, the country was doing well. But the wilder, more notable times were happening in the geopolitical sphere, where the United States, a country founded on ideals of anti-colonialism, was creating a sprawling overseas empire in the island-grabbing image of Great Britain and other European powers. This was United States’ central ambition of the time. It intended to expand trade, increase military might and show the world that the U.S. had arrived.

The reason Hawaii is now a part of the U.S. is that in 1893, American interests overthrew Queen Lili’uokalani, the ruler of the Kingdom of Hawaii, imprisoning her in her bedroom at ’Iolani Palace. It was a violent action against a sovereign nation. A century later, Congress passed and President Bill Clinton signed an Apology Resolution, acknowledging the U.S.’s role in this conspiracy. But American leaders of the nineteenth century celebrated, including William McKinley, who was elected president in 1896, on the Republican ticket. During the campaign, he vowed to annex Hawaii, and two years later, he did just that, saying, “We need Hawaii just as much and a good deal more than we did California — it is manifest destiny.”

Hawaii was merely the starting point. After the Spanish-American War, in 1898, the U.S. took over Puerto Rico, Guam and the Philippines, followed in 1900 by American Samoa and in 1917 by the Danish West Indies, which were immediately rechristened the U.S. Virgin Islands. Aside from the Philippines, all of these remain American territories. (They were joined in 1976 by the Northern Mariana Islands.)

Historians refer to this as the U.S.’s Imperial Moment, and it was the catalyst for the American century, paving the way for later nation-building and other overseas dalliances from the Panama Canal to Iraq to all-but-forgotten moments like the 1983 invasion of Grenada.

The Americans often arrived with saviors’ proclamations, a mask for the paternalist and racist enterprise. The residents of these new territories were, in this view, conquered people. Theodore Roosevelt, who succeeded McKinley, defended colonialism by saying, in 1909, that “the expansion of the peoples of white, or European, blood during the past four centuries has been fraught with lasting benefit to most of the peoples already dwelling in the lands over which the expansion took place.”

For many Americans, this also meant that the newly-acquired islands should never be fully politically integrated with the rest of the nation. Author Willis Fletcher Johnson made the case in his 1903 book A Century of Expansion, saying that Hawaii should remain a territory in perpetuity, to prove “the ability and right of this nation to acquire and to hold colonies, never intended for statehood, at any distance in any part of the world.”

Look closely at Jeff Sessions’ “Pacific Island” remark, and at Trump’s love for the Imperial Moment, and it’s hard not to see a connection to McKinley, Roosevelt and A Century of Expansion. There’s a line in the sand between “real” America and everywhere else — a nationalism-fueled decree that only the so-called authentic citizens have access to the full rights and benefits of conferred by the government and the broader society.

And, critically, the subtext of Sessions’s comments goes beyond Hawaii — which did, after all, eventually get statehood. In many important ways, the Imperial Moment is alive for the four million Americans who live in the territories — those islands in the Caribbean and the Pacific. Territory residents can’t vote for President and, in the case of American Samoans, aren’t even American citizens by birth. (They’re nationals; it’s complicated.) Across federal programs and services, there are many funding discrepancies, such as the fact that Guam, despite proudly boasting a military-enlistment rate higher than any state, ranked last in per-capita spending for veterans’ services by the Department of Veterans of Affairs in 2012.

This system could not exist without the aid of the other branches of government. It is also in large part thanks to a series of Supreme Court cases, called the Insular Cases, which began in 1901. The Insular Cases established that the territories belonged to the U.S. but were not wholly part of it. They lacked the full protection of the Constitution or the local sovereignty of states — they were, effectively, colonies. In one of the earliest cases, Downes v. Bidwell, the court ruled that the territories were “foreign in a domestic sense,” unworthy of full inclusion in the U.S. because they were “inhabited by alien races” unable to adapt to “Anglo-Saxon principles.”

Archaic as that sounds, the Insular Cases still stand. There are no signs of change, and there haven’t been regardless of who was in charge: Last year, the Obama Administration effectively endorsed the Insular Cases in a Supreme Court case regarding Puerto Rican sovereignty. No sitting president has visited more than three territories. No sitting president has ever even been to the Northern Mariana Islands.

It’s still early in the new Administration, and the President is famously unpredictable. But the evidence so far indicates that his Administration is particularly disinclined to help the territories. Millions of Americans will continue to live as second-class citizens as long as people like Jeff Sessions remain stuck in the Imperial Moment, thinking of them as lesser places and lesser people.

Doug Mack is the author of The Not-Quite States of America: Dispatches from the Territories and Other Far-Flung Outposts of the USA and has written for Travel + Leisure, National Geographic Traveler and the San Francisco Chronicle. He lives in Minneapolis. 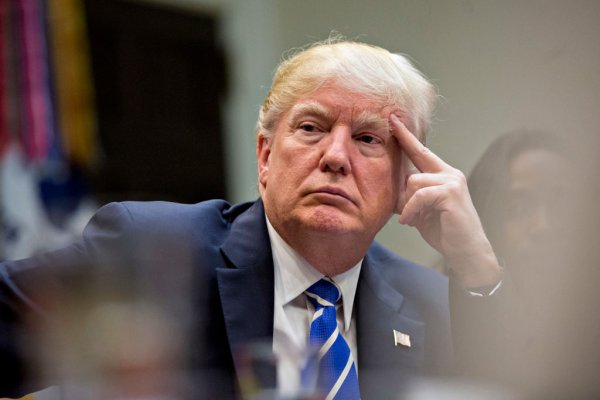 Women Trump Voters Are Starting to Doubt Him
Next Up: Editor's Pick