Barack Obama to Young Leaders: It's Time to 'Take Up the Baton'

Former President Barack Obama said Monday that while there are lots of issues on his radar, the most important thing he believes he can do in his next job is help the next generation of leaders.

“The single most important thing I can do is help in any way I can prepare the next generation of leadership to take up the baton,” Obama said.

After spending weeks out of the spotlight, Obama kick-started his new role as a leadership coach by hosting a discussion with students from across the Chicago area on civic engagement and leadership at the University of Chicago. Though the event was the former president’s first public appearance since leaving the White House, Obama avoided issues-of-the day, from the future of his signature health care law to the general work of his successor, to focus on talking about the issues he feels are critical to moving the country forward.

“So, what’s been going on while I’ve been gone?” Obama jokingly asked as he took the stage.

Gerrymandering, the divided media, and voter apathy were high on the president’s list of things to tackle. He’d drawn attention to those issues while in office, particularly during a speech he gave before the Illinois General Assembly last February. “What can we do all of us together to try to make our politics better?” he asked at the time. He appeared to return to that question at Monday’s event, though the audience was notably different. In 2017, Obama has swapped elected officials for the young people he believes will take the lead in the future.

After nearly an hour of Obama peppering the students with questions about getting engaged and making a difference, the students were given an opportunity to ask the former president questions. The first question came from a Roosevelt University student who asked the president about working with immigrants who may be afraid to come out of the shadows given the Trump administration’s rhetoric.

“Immigration is a good example of an issue that stirs up so much passion and sometimes misinformation that it’s hard for us to have a healthy conversation about it,” Obama said. “For those who are concerned about undocumented workers coming in…it’s important for them to also appreciate the degree to which these are overwhelmingly families looking for a better life for them and their children.”

Before leaving office, President Obama said immigration was one of the issues that could lead him back to political conversations.

Obama also answered questions about recovering from failure and owning your past. The former president is currently working on a book about his political journey, he said Monday. 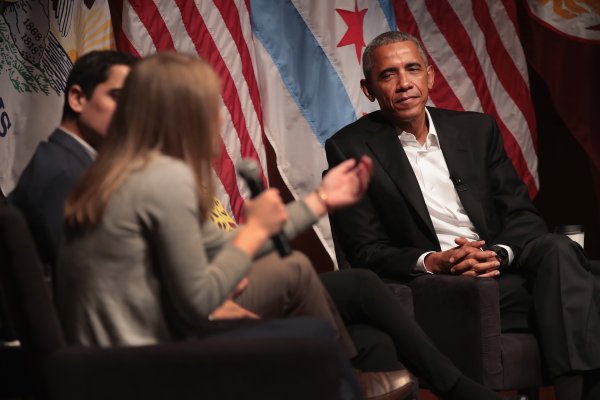