Aid Must Go Where It Is Most Needed, Even Amid War and Disease

People from the Nuba Mountains in Sudan hide under boulders to escape from government bombing in April 2012.
Alan Boswell—MCT/Getty Images
Ideas
By Tom Catena

The Nuba Mountains in southern Sudan is a rugged region the size of Austria and home to 750,00 men, women and children. It is also a conflict zone. Since 2011, a war has raged between the Government of Sudan, and the Sudanese People’s Liberation Movement, who are demanding self-determination and power-sharing for the Nuba people.

Caught in the middle of the struggle are those living in the mountains. They have suffered tremendously, with aerial bombardments a daily occurrence for many years. Villages and farms have been targeted, forcing the local population to flee into the mountains where they have little or no food. As can be expected, mass starvation has followed.

As one of two doctors at the region’s only hospital, I have experienced the atrocities and hardships of this war, firsthand. There have been times when I’ve treated as many as 500 people in a single day. Men who have received terrible burns across their bodies; toddlers who have lost legs to shrapnel wounds; people with leprosy and malnutrition; and children severely burned during middle-of-the-night attacks. It is an endless parade of victims with every war zone injury imaginable.

When the war first broke out, the Catholic mission that sponsored me wanted me to evacuate and return to the United States. But I stayed, and I’ve never regretted that decision. The difficulties of running a hospital in a conflict zone, however, cannot be underestimated. The staples for running a hospital anywhere else in the world— electricity and running water— are a luxury to us. And, most types of foreign aid are nonexistent. We don’t have access to medical technology. We don’t even have reliable telephone access. But I’m always on call, delivering babies, treating cancer, training my staff and all too often, repairing the wounds inflicted by war.

While I see way more tragedy than I ever imagined, I am also blessed to witness such incredible courage every day from our team and the people we serve. I recall treating a woman in her 60’s who had fled with her family to hide out in a cave, only to be hit with a shell that destroyed her foot and fractured her thigh bone. Unfortunately, we had no choice but to amputate her foot due to the extent of her injuries, and while she was recovering in our hospital, airstrikes came again. The hospital itself was hit, and at that moment, an 11-year-old girl nearby started crying. As the girl and the woman huddled on the hospital floor after the attack, the woman – in tremendous pain herself, with her leg propped in an uncomfortable position, and despite her own anguish, began to speak to the little girl, calmly, providing reassurance. She reached out with warmth, proceeded to tell stories, and concentrated on making the child feel somewhat protected in the midst of the frightening attack.

For me, the more challenging the situation, the more I know my services are needed. The same should hold true for the international community; as nations continue to be ravaged by conflict and disease, more aid is needed, not less. The international community needs to do more to help provide medical supplies, training and basic aid to help us better serve the people who need our services. We can’t just let hundreds of thousands of people be passed over and forgotten.

With all the discord around us, it’s heartening to see the hope in my patients’ eyes. They inspire me with their commitment to dealing with anything that comes their way, without bitterness. And so I do the same. 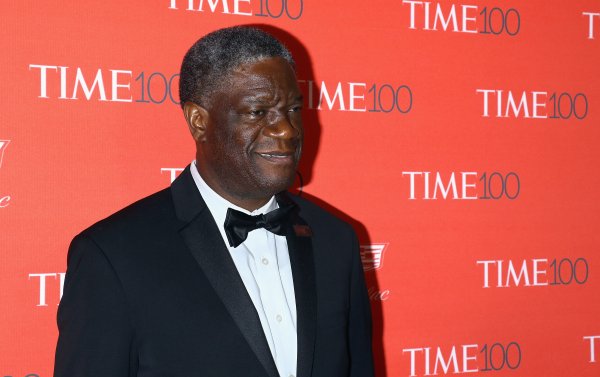 Denis Mukwege: Using Rape as a Weapon of War Should Cross Every International Red Line
Next Up: Editor's Pick