A Venezuelan opposition activist use a sling shot as they clash with the police in Caracas, on April 22, 2017.
Carlos Becerra—Anadolu Agency/Getty Images
By Joseph Hincks

Venezuelan President Nicolas Maduro has sought fresh talks with the opposition and endorsed local elections as he braces for further protests planned Monday, the BBC reports.

Calls for early presidential elections and Maduro’s resignation have resounded through weeks of political unrest in Venezuela, which is in the midst of an economic crisis and enduring shortages of food, basic goods, and medicine.

Speaking on his TV program Sunday, Maduro endorsed elections for mayors and state governors — the latter of which had been scheduled for last December — but he did not acknowledge demonstrators’ calls to bring forward the presidential elections, which are due next year.

This month, more than 20 people have died in Venezuela’s political unrest, according to Agence France-Presse, including 12 people in the capital Caracas on Friday. Human rights campaigners said more than 1,000 people have been detained with at least 700 of those still behind bars.

On Saturday, thousands of Venezuelans across the country wore white and marched in silence to commemorate those killed in the unrest.

Talks between the government and the opposition, which dominates Congress, collapsed last year after the latter accused Maduro of scuppering agreements and using the talks as a stalling tactic.

The opposition has laid blame for Venezuela’s economic crisis at the feet of the government, which triggered protests when the Supreme Court it controls attempted to take over congressional powers. Maduro’s opponents as well as foreign governments regarded the move as a step toward dictatorship. 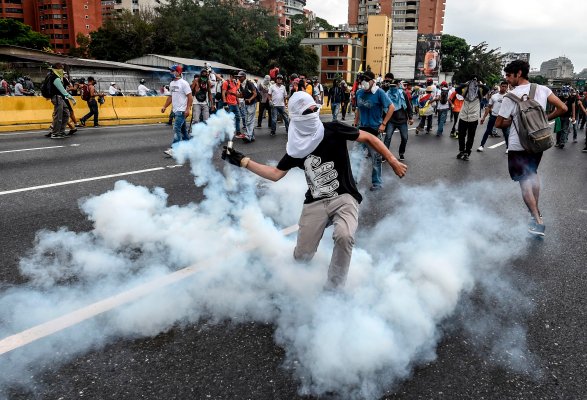