A finger pointing at a portrait of Maldivian blogger Yameen Rasheed on his blog "The Daily Panic," April 23, 2017.
Eranga Jayawardena—AP
By Kevin Lui

A prominent political blogger and democratic rights activist who used his Web presence to poke fun at the religious and political establishment of the Maldives was found stabbed to death Sunday.

Yameen Rasheed, who ran a blog called The Daily Panic, is the third media figure to be targeted in the archipelago in the past five years. The 29-year-old was found in the stairwell of his apartment in the capital Malé, with multiple stab wounds to his neck and chest, the Guardian reports. Family members said that he died in hospital shortly after arriving.

According to the Guardian, Rasheed, who ran the popular website alongside his day job in IT, was arrested in 2015 and jailed for three weeks after marching in an anti-government rally in Malé. A friend said that Rasheed had regularly been threatened with death, which he had reported to the police.

His death follows a 2012 stabbing attack on another blogger, Ismail Rasheed (a.k.a. Hilath), and the murder of lawmaker Afrasheem Ali that same year. A journalist, Ahmed Rilwan, disappeared in 2014 and has not been seen since.

Calling The Daily Panic “the Maldives’ only news website,” Rasheed wrote that he wanted to “cover and comment upon the news, satirize the frequently unsatirizable politics of Maldives.” His final entry was dated April 4.

Known for it’s beautiful beaches and luxury tourist resorts, the Maldives has remained politically tense since its first democratically elected President Mohamed Nasheed was deposed in 2012. The nation also faces a radicalization problem, with an increasing number of young men joining militant groups in Syria, according to the Guardian. Defamation laws are also routinely used against journalists, and the government under President Abdulla Yameen, has either arrested or exiled every opposition leader in the country. 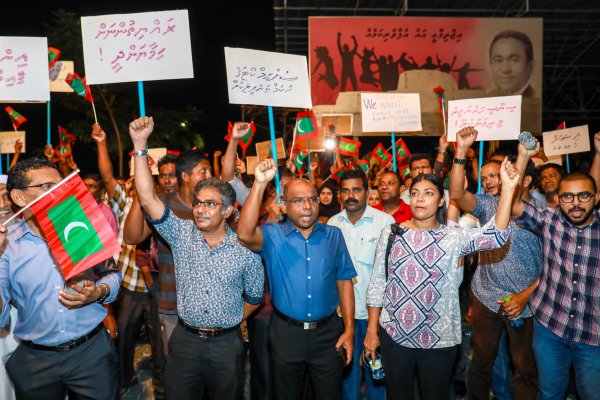 What to Know About the Political Crisis in the Maldives
Next Up: Editor's Pick