President Trump's 100-Day Goals Could Lead to a Shutdown

Donald Trump signs the first of three Executive Orders concerning financial services at the Department of the Treasury in Washington, D.C., on April 21, 2017.
Ron Sachs—AP
By Philip Elliott

Desperate for a triumph ahead of President Trump’s 100th day in office, the White House is furiously pushing for another attempt at scrapping the nation’s health care law this week, hinting that deep tax cuts are on deck and adding border wall blueprints and a boost to Pentagon spending to the hopper to boot.

Welcome to Trump’s week of magical thinking. On their own, any of these projects can take months of work in Washington. Now the President wants to jam all this into a single week, let alone one in which lawmakers face a Friday deadline to approve a federal spending measure. Failure to find agreement would shut down the government.

The vote will be one of the first consequential moves since Republicans gained control of the House, Senate and White House—and it could indicate to voters that the GOP isn’t capable of governing despite unified control of Washington. Without coordinated action, federal agencies will shut their doors, workers won’t report for duty and vast parts of the government will stop in their tracks. It’s a serious situation—and certainly a more urgent problem than Trump’s goal of ditching President Barack Obama’s health care legacy, slashing tax rates or finding cash for a border wall that, at best, won’t be finished during Trump’s first term in office.

Administration officials spent the weekend ramping up pressure on lawmakers, even as they sent mixed signals about what the President would settle for and what he would insist Congress include in a spending plan. White House chief of staff Reince Priebus told NBC’s Meet the Press that perhaps increased spending for border security could appease Trump’s demand for brick-and-mortar wall funding. “I think we’ll be OK with that,” Priebus said, without much conviction.

Meanwhile, the White House budget chief tried to project calm. “I don’t think anyone foresees or expects or would want a shutdown,” budget director Mick Mulvaney told Fox News Sunday. Yet asked how intractable Trump is on the border funding question, he cautioned: “We don’t know yet.”

And that’s the most unpredictable aspect of this momentous week. Trump prides himself on his deal-making skills. But government isn’t real estate, and there are prescribed ways to fund it. Over the weekend, Trump tried to outline a spending bill in 140-character bursts. For instance: “Eventually, but at a later date so we can get started early, Mexico will be paying, in some form, for the badly needed border wall.” Perhaps the President was trying to tell Congress not to worry about the cost of the wall. But an IOU signed by only one country isn’t going to help lawmakers foot the bill.

Then there’s the pesky question of who is picking up the tab for all of this new spending Trump wants. Republicans for years have insisted any new spending be matched, dollar-for-dollar, with cuts elsewhere. Mulvaney, a former Tea Party lawmaker from South Carolina who once insisted on such spending offsets, said he wasn’t sure the party orthodoxy still held: “I don’t think we’ve decided that part yet.”

In a conference call with fellow Republican House members on Saturday, House Speaker Paul Ryan said that keeping the government open was his top priority. He also seemed to suggest that he was sympathetic—but not beholden—to the White House’s goals. “Wherever we land will be a product the President can and will support,” Ryan told colleagues, according one top Republican staffer who listened to the call.

At the Capitol, senior aides to Republican lawmakers have been rolling their eyes at the President’s gumption—and his cluelessness about how Washington works. Some traded dismayed text messages after Trump’s off-handed comment that it might not matter if Congress gets its act together on health care. “We’ll see what happens,” Trump told reporters. “No particular rush, but we’ll see what happens.”

Democrats were in no hurry either to help the President out of a mess made by his own ambition. “The wall is, in my view, immoral, expensive, unwise,” House Leader Nancy Pelosi told Meet the Press. It’s unlikely that a single House Democrat will vote for a funding bill that includes cash for fencing. That could squeeze Ryan if his conservative flank revolts over other deferred priorities, such as cutting Planned Parenthood funding or killing subsidies for poor Americans’ health care.

Trump’s first bulldozer-in-a-bureaucracy attempt to trash the health care law came up embarrassing for all Republicans involved. The President insisted Ryan schedule a vote on health care repeal, then was forced twice to postpone the vote before scrapping it altogether. Trump said he was willing to move on, but that’s no longer the case. He’s been telling White House aides he wants it gone, pronto. And, while Congress is at it, to cut taxes and build the wall that was so popular at his campaign rallies. “My base really wants it,” the President told The Associated Press last week.

The White House is trying to accommodate Trump’s demands. But there are limits to what the administration can do. Congress—specifically, the House—is the starting point for all spending plans. The Senate would need to approve the lower chamber’s work. To do so will require at least eight Democrats to vote with the Republican majority. If he wants to keep the government open, Trump may be forced to sign a spending bill missing items on his wish list.

Trump seems to be bracing for the moment. Last week, he tweeted the 100-day marker was a “ridiculous standard,” arguing that regardless of his accomplishments, the “media will kill!” But inside the White House, Trump wants his first hundred days to be feted. His lieutenants have struggled to figure out how best to commemorate the milestone. One element will be a Saturday evening rally in Pennsylvania, which helped deliver his Electoral College victory. But if the President keeps adding demands to the agenda, his celebration could come with the government shuttered and voters looking for someone to blame. 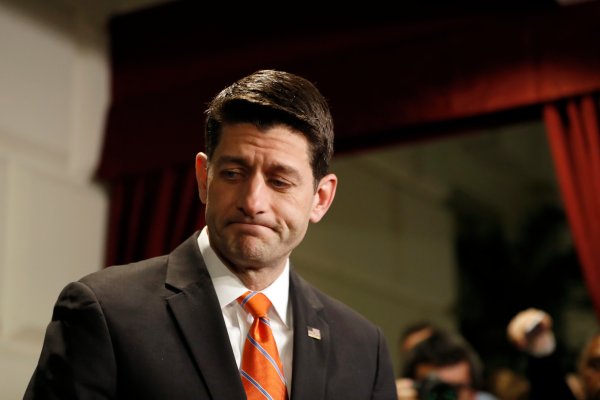