'It's About Facts.' Thousands Protest and Make Friends in the Rain at the March for Science

When Dennis and Christina Dorward awoke to their alarm at 3 a.m. on Saturday morning, there wasn’t a question of whether they would get out of bed, catch a four-hour bus to Washington, D.C., and brave a chilly rain on the National Mall to protest — all in the name of science.

“We were committed,” said Christina Dorward, from beneath both a windbreaker and an umbrella. “We weren’t going to miss this.”

Like thousands of other people, the Dorwards joined the so-called Science March, which was organized by a coalition of activists and scientists, to voice concern for what they see as President Donald Trump’s dismissal of scientific research and to protest his proposed budget cuts to the Environmental Protection Agency and the National Institutes of Health.

Protesters’ hand-painted placards and signs lamented President Trump’s repeated questioning of the legitimacy of vaccines, as well as his promise to to cut $900 million from the Department of Energy’s Office of Science, and withdraw from the Paris Climate Treaty. Other protesters’ signs lambasted the Trump Administration’s executive orders deregulating coal waste dumping, scrapping Obama-era clean air regulations, and the President’s decision to appoint Scott Pruitt, who has questioned whether climate change is real, to head the EPA.

“Everyday, it just feels like there’s something new. They’re rolling back this, or doing away with that, or un-doing gains that were inadequate in the first place,” said Dennis Dorward, who teaches construction management near his hometown of Muncy, Pennsylvania. “It’s just too much.”

But while the protest hummed with an undercurrent of Democratic politics — several dozen protesters carried signs repeating Hillary Clinton’s tagline, “I’m With Her,” but referencing, in this case, Mother Earth — much of it was notably apolitical. Many participants described themselves as “moderate,” “in the middle,” or simply “not political at all.” Several held signs explicitly distancing their support for science from any political activism.

“Not a paid protester. Believe men, I’d rather be in lab!” read one bearded young scientist’s sign.

“Science is NOT a liberal conspiracy,” read another.

“This isn’t about politics. It’s about facts,” read a third.

One protester, a computer scientist, poked fun at his colleagues, who are better known for geeking out in basements than braving the great outdoors. “You know it’s bad when the PROGRAMMERS march!” his placard said.

Frank Migliorino, Laurie Ruffenach, and Kristen Batto, all of whom teach environmental science to high school students in New Jersey, said they were motivated to get up in the wee hours of the morning and take a shared bus to the march simply because they worry that their students are getting a skewed view of science and factual objectivity, and how leaders should treat peer-reviewed evidence.

“It’s really important to teach students not to believe everything they hear, but to research and find reliable sources,” said Ruffenach, who has also taught chemistry, physics, and biology over the course of her 25 years in the classroom. “It’s a life skill nowadays.”

Many of the protesters on the National Mall Saturday also cited personal reasons for braving the pouring rain.

Sarah, who’s 24 and who declined to give her last name because she’s an employee of the federal government, says she credits federally-funded research on pediatric cancer for helping to cure her Hodgkins Lymphoma, which she was diagnosed with as a child. Christina Doward, who suffered a stroke awhile ago, credits scientific advancements in fields like neurology and physical therapy for her near full recovery today. Angela Peerman of Price Georges County says science is the only reason her daughter, Cerri, who was conceived using IVF, is alive today.

Cerri, for her part, who’s 12-years-old and sports a soaking wet green hoodie, offers a different reason for braving the wet. “Because science is cool,” she says, as if the answer should be obvious. She recently won an “Honorable Mention” at a science fair for an experiment heating coiled fishing wire to make a “thermal actuator” and plans to be a scientist when she grows up.

Erin Ckodre, 21, a graphic design major at Texas State University in San Marcus, Texas, flew into Washington Friday evening by herself, just to participate in the march. For her, it was worth the plane ticket and a night at a hotel just to be counted among the masses. “My generation, Millennials, we are the ones who are going to be inheriting the planet,” she said. “We have to be out there saying how important this is, because it’s matters more to our future than to the Baby Boomers’ future.”

As for the Dowards, they’re glad they came. The 3 a.m. alarm, four-hour bus ride, and pouring rain were all worth it. But on the way back home tonight they have a new plan: “Sleep,” said Christina, with a laugh. “We’ll probably sleep.” 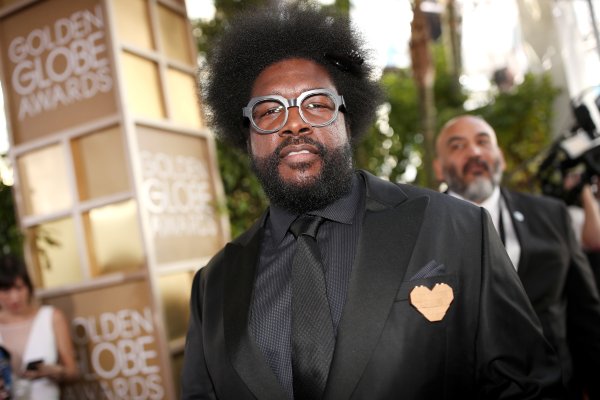 Questlove Speaks at March for Science: ‘We Need to Make Sure Science Belongs to the People’
Next Up: Editor's Pick