A Russian serviceman takes a picture of Lenin's Mausoleum in central Moscow in 2008.
Mikhail Voskresenskiy—Reuters
By Simon Shuster

The ties between Vladimir Putin and the Russian Orthodox Church were tested twice this week – by coincidence, on the same day, April 20 – and with two very different outcomes.

In an astounding victory for the Orthodox Church, Russia’s highest court ordered the “liquidation” of the local branch of the Jehovah’s Witnesses, whose missionary work the government had deemed “extremist,” in no small part because it posed a challenge to the teachings of the Orthodox clergy.

As that ruling came down, a separate scandal was unfolding in the Russian parliament over another of the Church’s demands – this one far more consequential for the Orthodox faith than any competition it might face from the Jehovah’s Witnesses. A group of lawmakers, including members of Putin’s party, had proposed a bill calling for the burial of Vladimir Lenin, the Russian revolutionary and founder of the Soviet Union, whose body has been on display in Red Square since his death in 1924.

Waxen from embalming fluid and protected by a box of bulletproof glass, the corpse has long been a pilgrimage site for communists and an eerie attraction for tourists. It’s also an outrage to Orthodox believers across the Russian-speaking world, for whom the granite tomb just outside the Kremlin stinks of idolatry. It violates Christian burial customs, and it casts a shadow on one of the most iconic temples of the Orthodox faith, St. Basil’s Cathedral, which sits on the same square. More to the point, the tomb honors a communist who didn’t merely persecute Christians – he ordered the murder of Tsar Nicolas II, who has since been canonized as an Orthodox Saint.

For most Russians, the Church’s objections to Lenin’s mausoleum seem perfectly reasonable. “Russia isn’t ancient Egypt,” one of the authors of the bill calling for Lenin’s burial, Ivan Sukharev of the Liberal Democratic Party, told a local newspaper this week. “And it isn’t right that we’ve got a mummy in the center of our capital.” (To be strictly accurate, Lenin’s body is embalmed and not mummified — though the design of his tomb does borrow elements from the step pyramids of ancient Egypt.)

Vladimir Lenin, founder of the Soviet Union, lays embalmed in his tomb on Moscow's Red Square in 1997.
Sergei Karpukhin—AP

In the last few years, surveys taken across the country have consistently found that a majority of Russians – and especially the roughly 40% of them who identify as Orthodox Christians – would like Lenin’s body to be buried. The most recent survey, published on Friday by one of the Kremlin’s polling agencies, found only a third of respondents want the corpse to stay put, roughly in line with the level of support that the Russian Communist Party still enjoys in many regions of the country. The same poll found that 63% of Russians want Lenin to be interned.

Yet Putin has made no move to comply with the wishes of the majority. Quite the opposite, in fact — his political party, United Russia, angrily disavowed any connection with the bill that demanded Lenin’s burial this week. “This legislation had no chance,” said one of the party bosses, Evgeny Revenko, in announcing that his colleagues would withdraw their support for the measure. “In our initiatives, we need to be extremely careful not to divide people,” he wrote on his Facebook page. “We need decisions that unite us.”

It’s just the latest ideological contortion Putin has made in attempting to reconcile Russia’s communist past with its Orthodox traditions, but it’s far from the most bizarre. In one of his rare remarks on the issue of Lenin’s tomb in 2012, Putin argued that the Soviet Union had actually borrowed from Orthodox customs when it decided to embalm its founder and put him on display.

Addressing a meeting of his supporters that December, Putin said that many Orthodox shrines also have “the remains of holy people. And in this sense the communists latched on to that tradition. They did it competently. They did it in line with the demands of their era.”

It was an astonishing pronouncement, appearing to equate Lenin’s corpse with the bones of Russian saints, and it horrified a lot of Orthodox believers. But it shouldn’t have surprised them; though he often puts on displays of piety and makes pilgrimages to holy places, the former colonel of the KGB is still a product of the Soviet system, and he still reveres its symbols. During the same meeting with his supporters in 2012, he said with a tone of regret in his voice that, “After the collapse of the Soviet Union and its ruling ideology, nothing appeared in its place.”

That still holds true today. The closest thing to an ideology that Putin has devised during his 17 years in power is this strange mash-up of incompatible idols, the Soviet and the Orthodox, jostling for position at the Kremlin walls. In order to appease one of them, his government is happy to ban a small foreign sect like the Jehovah’s Witnesses. But Putin cannot take sides definitively with either the Christians or communists. The Janus-faced President has to be both. 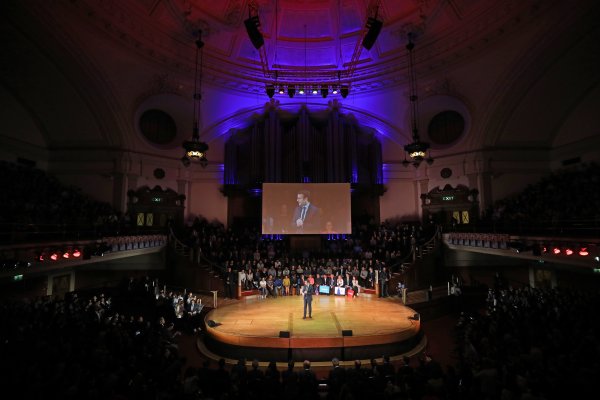 In London, French Expats Rally for Presidential Picks Across the Channel
Next Up: Editor's Pick