There would be no Apple without Steve Wozniak.

Wozniak, who co-founded Apple over 40 years ago with the late Steve Jobs, remains a revered figure in Silicon Valley. Although he is no longer connected with Apple, he keeps busy making appearances at big tech conferences to inspire inventors, serves as chief scientist for the enterprise data storage startup Primary Data, and even found time to cha-cha-cha on the TV show Dancing With The Stars a few years ago.

On Friday, Wozniak returns to the upcoming Silicon Valley Comic Con event where pop culture fans, celebrities, and technologists will celebrate “the nerd side of things,” as he put it. In this edited interview with Fortune, Wozniak discusses how his former company is acting like Microsoft, the influence of money in Silicon Valley, and being an introvert in the social networking era.

Fortune: How has the tech landscape changed over the years?

Wozniak: When Steve and I started Apple we were so naïve and young. We didn’t know anything about business. We didn’t know that it’s often the case that you start a company and then you get bought out as an exit strategy. We thought that you start at home, you make a product, and become profitable so you have your company forever. As long as it makes a profit, it never goes away. That’s how I thought companies worked. Boy, it’s a different story now in Silicon Valley.

I think there are an awful lot of people who have a quick exit plan like selling the business to another big company to get enough money to buy a house in San Francisco. Then they move on to the next one. There are many companies that are started by business people and not engineers. Engineers say, “What would be a cool product? What would make the world greater and better?” That’s where I come from.

Engineering is your line of work.

I do not invest. I don’t do that stuff. I didn’t want to be near money, because it could corrupt your values.

What are your thoughts on the rise of engineers as rock stars in Silicon Valley?

Mostly it’s because of how much money they have—and I went the other way. I did not want to be one of them. I invested early in things like museums in the city I love, San Jose. I was born there, and I have a street named after me there because of it. I really didn’t want to be in that super “more than you could ever need” category.

Did you ever think when you were starting Apple that software companies like Facebook would become so dominant?

Well, there was Microsoft. I was just on CNBC and they were asking, “Oh, my gosh. Apple wants to make this software and license it for self-driving cars.” Well, Apple’s becoming Microsoft. Microsoft had an operating system that was their crown jewel and they licensed it to everybody. Apple said no—they had to make the hardware. Hardware and software have to go together [in computers], but not so in cars.

What is your take on commercial space travel and people like Amazon CEO Jeff Bezos and Tesla CEO Elon Musk getting involved?

It is very risky, but it is fascinating to watch what these companies are doing.

Yeah, space exploration comes down to engineering and scientific knowledge. It does take a certain amount of funding, but NASA’s budget seems so small for what they bring us. It just seems so small that I’m not surprised that large private players can make a difference too.

You recently said that companies like Apple and Google would be even bigger in 2075 than they are now. Do you think these companies will do so by expanding into other areas, like how Google and Apple are moving into healthcare?

I don’t know. Every company should do what they’re good at. There are actors who are just good at acting. Everyone shouldn’t try to do every single thing in the world, and Apple’s big thing, really, is more about protecting the brand. Making products a certain way that protects your brand. That’s one role. That’s one key role in the world, and it doesn’t mean making every single product. Everyone who owns Apple shares just says, “No, no, no, you gotta have something new now.” Well that’s Silicon Valley in that you’re always chasing the next new thing and you never get to stop. I mean unless you’re somewhat smart.

Why is your Twitter feed essentially a timeline of places you’ve visited and restaurants you’ve eaten at?

I am not the right person for social networks. I was never social in my life. I am not good at socializing in person.

I skipped Facebook and I skipped Twitter when it came out, because I’d wind up with everybody asking me to be a friend. I have 5,000 Facebook friends I don’t know, and I’m going to scan what they’re doing in their lives everyday? It doesn’t work well for me because I won’t just cut it down to the only 100 people I really know.

But I found Foursquare. I was actually in Spain and some young kids introduced me to Foursquare, so I started checking in. I thought, “My wife will be able to see where I am.” But if I check into a restaurant and somebody comments on it, I get that comment in an email from Facebook. So I typically have 100 to 200 Facebook inquires a day, and some of those I go in and answer when I feel my answer’s important.

It’s interesting that you prefer Foursquare over other social networks.

It’s kind of one directional, and Twitter can be one-directional. To tell you the truth, I admire what Twitter is and what it’s done for the world. And I admire Facebook, but I’m a little scared of the power Facebook and Google get and I avoid them more than most people. My calendar is on Google and about nothing else of me wants to touch Google. When I get these advertisements all over the place and they’re exactly what I’ve been looking at recently, you’re living in my world. You’re making it stale. That’s not the adventurous world of going and watching a new movie with superheroes achieving victory.

That’s today’s level of simulated intelligence to kind of knowing you. The funny thing is, everyone in popular culture movies has to be an individual—to be above the others, to be super. And that’s how we think of ourselves as human beings. Well what am I? I’m what’s in my brain. I have my memories, my feelings, my way of thinking of the world. And that’s who I am. 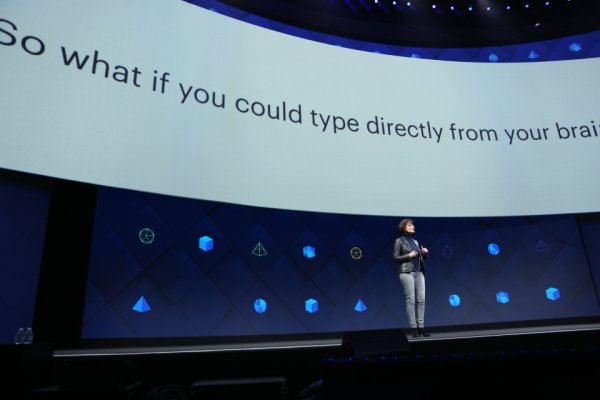 Facebook's Wild Vision for the Future Includes Typing With Your Brain
Next Up: Editor's Pick