President Trump has spent weeks hyping the success of his Administration’s first 100 days in office. But he seemed to turn on the metric Friday, tweeting that it’s a “ridiculous standard.”

“No matter how much I accomplish during the ridiculous standard of the first 100 days, & it has been a lot (including S.C.), media will kill!” Trump tweeted Friday morning. (“S.C.” seems to refer to Trump’s pick Neil Gorsuch being confirmed to the Supreme Court.)

The president’s souring on the 100-day marker, often used to judge nascent presidencies, comes as voters have expressed their displeasure in a new poll and a shutdown fight looms in Congress. In a new POLITICO/Morning Consult poll released Thursday, 24% of voters gave Trump an ‘F’ when asked to grade his first three months in office. He’s even struggling among his own base: 42% of Trump voters graded his first 100 days a ‘B,’ and another 23% give him a ‘C’ or below.

Trump is also likely managing expectations because his 100th day, April 29, coincides with the expiration of government funding. The White House is trying to revive the failed push to repeal Obamacare by attaching it to the spending bill that needs to pass next week, setting up a shutdown fight that will occur right as Trump marks the milestone.

In Wisconsin earlier this week, Trump crowed that “no administration has accomplished more in the first 90 days.” But with wary voters and a scrambling Congress, the president is already trying to downplay the moment. 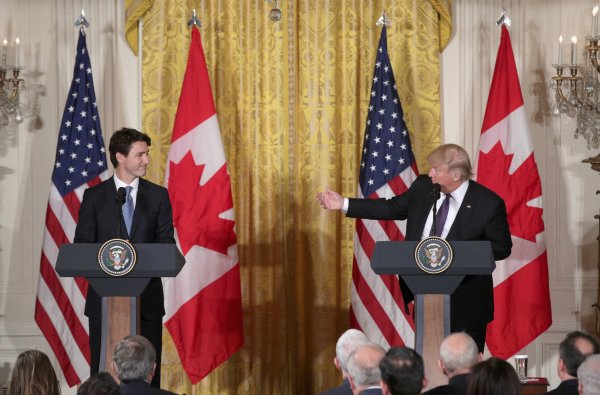