Demonstrators clash with the riot police during a protest against Venezuelan President Nicolas Maduro, in Caracas on April 20, 2017.
Juan Barreto—AFP/Getty Images
By Brian Ellsworth and Diego Oré / Reuters

Venezuela‘s opposition renewed nationwide protests on Thursday to pressure President Nicolas Maduro to hold elections and improve a collapsing economy, and vowed to keep up pressure by staging three more protests in the next four days.

Thursday’s crowds were smaller than the hundreds of thousands of people who flooded the streets of Caracas and provincial cities on Wednesday, the latest and largest in several weeks of protests against what Maduro’s opponents condemn as a lurch toward dictatorship.

But still, thousands of people waving Venezuelan flags and shouting “No more dictatorship” took to the streets in the capital and across the oil-rich nation.

The opposition’s leadership then called for further protests in communities across Venezuela on Friday, a white-clad “silent” march in Caracas on Saturday to commemorate the eight people killed during unrest this month, and a nationwide “sit-in” blocking Venezuela‘s main roads on Monday.

That sets the stage for prolonged disruption in volatile Venezuela, where security forces have been blocking rallies this month and protests have dissolved into clashes with rock-throwing youth.

“Today the people of Venezuela showed they are committed to this cause,” said opposition lawmaker Freddy Guevara during a news conference late on Thursday, urging people to stay on the streets.

Government officials dismiss the protests, characterized by street barricades and clashes with security forces, as violent and lawless efforts to overthrow Maduro’s leftist government with the backing of ideological adversaries in Washington.

The opposition counters that Maduro, deeply unpopular as Venezuelans grapple with triple-digit inflation and shortages of food and basic consumer goods, is seeking to stay in power indefinitely by barring opposition leaders from office and quashing independent state institutions.

“Protests will need to grow and persist over the coming weeks to force a political transition,” Eurasia analyst Risa Grais-Targow said in a note on Thursday.

“The opposition’s response to regional elections, which the National Electoral Council will probably call in the coming days, will be key to maintaining momentum in the streets.”

The current wave of marches, the most sustained protests against Maduro since 2014, has sparked regular melees. There were also late-night barricades and some looting in Caracas’ middle-class neighborhood of El Paraiso on Wednesday night.

Two students and a National Guard sergeant were killed in Wednesday’s demonstrations, bringing the death toll in demonstrations this month to eight. Rights group Penal Forum said more than 500 people were arrested in relation to Wednesday’s protest and 334 remained in detention.

Capriles In The Eye of the Storm

The renewed wave of protests was sparked by a Supreme Court move in March to assume the powers of the opposition-led Congress, a move that it largely reversed a few days later. They were further fueled when the government barred the opposition’s best-known leader, two-time presidential candidate Henrique Capriles, from holding public office.

Maduro on Thursday night said Capriles wrongly accused authorities of killing university student Paolo Ramirez in the restive Tachira state near Colombia on Wednesday. Her boyfriend and mother have both said she was shot down by government supporters chasing her on motorbikes after a protest.

“Immediately the global media and those irresponsible people, including that trash called Capriles, came out to accuse the government, the revolution, the army, the National Guard,” Maduro said, wearing a white doctor’s gown during a televised address meant to showcase Venezuela‘s health system, which is in fact crumbling.

“I’ve authorized a lawsuit, a complaint for the honor of these people who have been accused. If he has to go to jail, he should go and pay for this defamation, this slander, all the crimes he’s committed,” added Maduro.

Capriles responded on Twitter that Maduro, “like all dictators,” is a compulsive liar, and called onVenezuelans to keep up protests.

That push increasingly mirrors protests in 2014 in which Maduro’s critics barricaded streets and battled police for close to three months. That effort ultimately faded amid protester fatigue and a heavy state crackdown.

But the sharp deterioration of the economy, which has put many foods and medicines out of the reach of the average citizen, and a more organized and united opposition coalition have injected fresh energy into the current protests.

“This is the moment,” said Raquel Belfort, a 42-year-old protester in wealthier eastern Caracas on Thursday, sporting a hat in the yellow, blue and red colors of the Venezuelan flag.

“People are sick of this…. we’ve touched rock bottom. I think if we take to the streets every day we’ll end this government.”

Maduro critics increasingly doubt that the ruling Socialist Party, which was soundly defeated in 2015 legislative elections, will allow for free and fair elections. The ballot for state governors has been delayed since last year and elections authorities have not announced when it will be held. 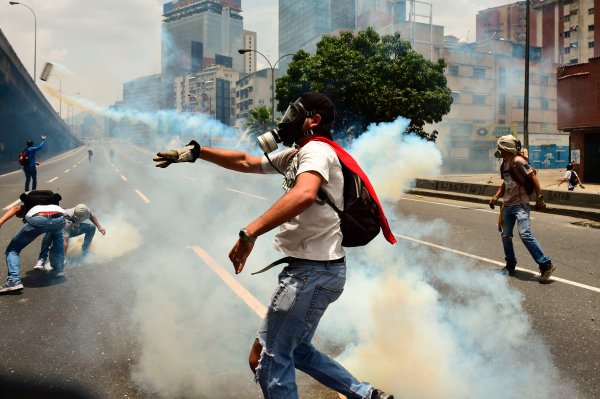