The Real History to Know Before You See The Promise

When The Promise arrives in theaters on Friday, the film — starring Oscar Isaac, Charlotte Le Bon and Christian Bale — will do so just in time: its dramatization of a story that takes place amid the slaughter of Armenian citizens by the Ottoman Empire coincides with the annual day of remembrance in Armenia on April 24.

On that day in 1915, hundreds of Armenian intellectuals were arrested in what is believed to be the start of what’s widely known as the Armenian genocide, though the use of that terminology remains controversial more than a century later. During World War I, the Ottoman government’s ruling party, led by a triumvirate often known as the “Three Pashas,” concocted a plan to eradicate their Armenian population, the largest Christian minority in Turkey at the time. The plan led to laws permitting the confiscation of Armenians’ property and the deportation of these citizens, by methods including marches to concentration camps in the Syrian desert during which many died along the way.

There were about 2.1 million Armenians living in the Ottoman empire in 1914, and about 387,800 by 1922, according to The University of Minnesota’s Center for Holocaust and Genocide Studies.

“Armenians had become forces for social and political change within the empire and were asking the state, Can a Christian be the equal of a Muslim in the Ottoman empire?” says Peter Balakian, who won the 2016 Pulitzer Prize in poetry for Ozone Journal, his book of poems recounting his experience excavating the bones of Armenian victims in the Syrian desert with TV journalists in 2009. “The new nationalism in Turkey, especially after Turkey’s enormous losses in the Balkan wars, [led to the feeling] that Turkey could only be revived and saved if it got rid of its Christian minority populations. There are similarities with Nazism, in terms of thinking that, in order to revitalize a state in crisis, you need to eradicate a certain ethnic group.” (In fact, evidence shows that Adolf Hitler spoke of how what happened in Turkey influenced his plans to wipe out the Jewish population.)

“It’s a watershed event in the history of modernity,” says Balakian, “because it’s the first time that the nation-state uses technology, its advanced military communications, legislation and the nationalist ideology for the purpose of eradicating a targeted ethnic group in a certain period of time.”

Since then, Armenians have been trying for decades to get Turkish authorities — and other authorities around the world — to recognize the treatment of Armenian citizens of the Ottoman Empire as a genocide. For their part, those on the other side contend that the deaths in question took place amid a larger World War I context, in which they would not qualify as a genocide.

In October of 2007, as the U.S. House of Representatives debated whether to pass a resolution specifically condemning the Armenian genocide of 1915, in those words, Samantha Power (then a foreign policy advisor on Barack Obama’s 2008 presidential campaign) argued in the Oct. 29, 2007, issue of TIME that the House should do so. Even though it may have seemed that there was too much at stake regarding U.S.-Turkish relations — “Some 70% of U.S. air cargo en route to Iraq passes through Turkey, as does about one-third of the fuel used by the U.S. military there,” she explained — she argued that the consequences of Turkish anger over such an action would be minimal:

The U.S. House Committee on Foreign Affairs voted to pass the resolution 27-21, but it didn’t make it to the House floor for a full vote. The same thing happened in 2010.

Still, Barack Obama broke his campaign promise to call the killings “genocide,” referring to the incident in a speech for Armenian Genocide Remembrance Day as “the first mass atrocity of the 20th century.” At least 26 countries have recognized the “Armenian genocide” as such, according to the Armenian National Institute.

As the world still comes to grips with what happened in 1915, Balakian sums up one reason the effort to do so matters: “Unresolved history is too big a burden to carry.” 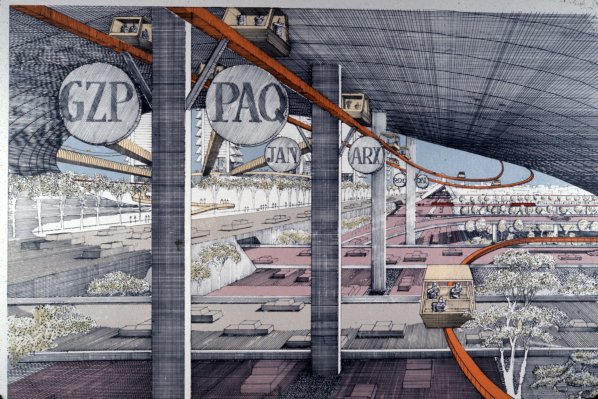 Manhattan Almost Had a Highway Running Across It. Here's What It Would Have Looked Like
Next Up: Editor's Pick